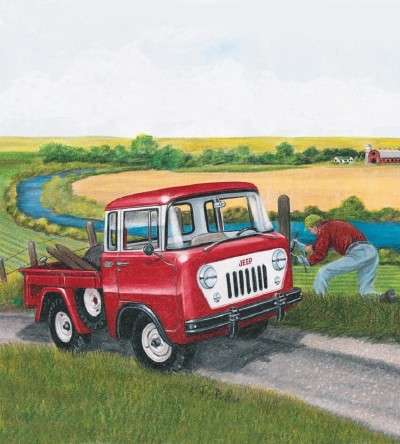 The 1957 Jeep debuted with a modern-looking, roomier cab. See more pictures of Jeeps.

Willys' various Jeep products projected an image of go-anywhere capability, thanks to their four-wheel drive, which was still a bit of a novelty in the mid Fifties. However, with bigger competitors about to move into the 4X4 truck field, Willys had to explore another uncharted niche with the 1957 Jeep.

Independent automobile companies in America always had a tough road to travel. They couldn't afford to be overly conservative with the design of their products or they'd lose the vital advantage of offering something buyers couldn't get in a Big Three brand. Still, many firms learned to their regret that wandering too far ahead of the mainstream tended to run up against most buyers' inherent sense of caution.

Hudson's 1948 "Step-down" design is a perfect example of an advanced design that hit the market at just the right time and sold like nickel cigars. The 1949 "bathtub" Nash is another. In contrast, the Jeep Forward Control trucks are examples of a design that was probably too advanced for its time.

However, while the unusual For­ward Control models never enjoyed the popularity for which Jeep officials had hoped, these rare and unusual trucks had a surprisingly long production run that extended around the globe.

Willys-Overland quickly got back to building civilian vehicles at the end of World War II. Unlike other auto manufacturers, though, changing over to peacetime production from military ordnance wasn't that big of a deal for Willys. It took the wartime Jeep MB, added a tailgate, softer springs, new colors, and a few other modifications, renamed it CJ-2A, and started selling it through dealers. Also out for 1946 was a station wagon that mixed a car-like chassis with Jeep-inspired styling. The following season, Willys introduced a panel truck and pickup with styling derived from the wagon.

Available in two- and four-wheel-drive models, the Jeep pickup was an immediate hit. However, management soon noticed that, while the four-wheel-drive pickup sold in decent numbers, the two-wheeler didn't. The reason was simple enough: Willys' two-wheel drive jobs had to compete with every light truck on the market, while the four-wheelers were virtually the only inexpensive factory-complete 434 pickups available. (Another four-wheeler pickup inspired by wartime experience, the Dodge Power Wagon, cost hundreds of dollars more.)

By the end of 1951, the company ceased building two-wheel-drive pickups, except for an occasional special order. The Willys name was becoming synonymous with four-wheel drive. By 1956, more than 90 percent of Willys production was of four-wheel-drive vehicles, with two-wheelers limited to some station wagons and panels, as well as the new Dispatcher commercial series, essentially a two-wheel-drive Jeep CJ.

To this point, aside from minor trim and mechanical updates, the Jeep trucks remained virtually unchanged. Mean­while, competitors' trucks had evolved, gaining larger, roomier cabs; bigger cargo beds; and more optional equipment, including luxury touches formerly limited to passenger cars. And, inevitably, they began to offer four-wheel drive versions. Clearly it was only a matter of time before rivals would overrun Jeep's entrenched position.

Willys management, realizing it needed to react to the competition, began to set down plans for a new range of trucks with cabs and bodies that were very modern. Set to make their debuts in 1957, they would be the first all-new Jeep trucks since 1947.

Styling was the work of Brooks Stevens, the Milwaukee-based industrial designer on retainer with Willys since the mid Forties. Stevens came up with a bold design that took its styling cues from the big cab-over-engine trucks that hauled freight on cross-country routes.

To give the new trucks a "family look," the front end bore a seven-slot grille that instantly identified it as a Jeep vehicle. Dubbed the "Forward Control," the design was very distinctive and clever. It provided full-size carrying capacity in a small -- almost tiny -- exterior size. Though compact by most measurements, it boasted a roomy cab and a surprisingly large bed. The Forward Control (or FC) series allowed Willys to outflank the competition by offering something completely different from other manufacturers. It must have seemed like the right approach for a small company like Willys.

Engineering was under the direction of A. C. Sampietro. Two series would be offered initially. The smaller FC-150 was built on an 81-inch wheelbase, same as the CJ-5, while the FC-170 came on a 103.5-inch wheelbase. FC-150s mounted a 6.2-foot bed and were powered by the famous Jeep Hurricane F-head four-cylinder engine. Although good for just 75 bhp at 4,000 rpm and 115 pound-feet of torque at 2,000 rpm, the 134-cid Hurricane was dependable and as tough as an anvil.

A lower-compression version of this engine was offered for high-altitude areas where pinging might be a problem. FC-170s were heavy-duty work trucks, powered by the 105-bhp 226-cid Super Hurricane L-head six-cylinder engine and boasting a 110-inch-long bed. Bed width was four feet compared to the FC-150's three feet. (The 150 had considerably narrower wheel tracks.) Willys claimed the FC-170 offered "the greatest cargo area for its length and wheelbase of anything in its class ... 3,510 pounds of payload ... 45 cubic feet of cargo space ... 9 feet of unobstructed floor length."