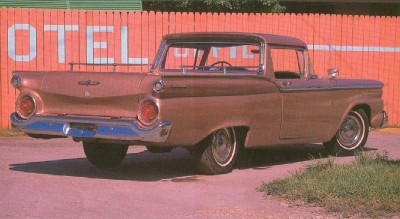 The 1957 Ranchero had 32.4 square feet of cargo space, considered sufficient in 1957, but no more than most of today's compact longbed pickups. The tailgate was the lower section of the 1957 wagon tailgate. The only addition was the chrome steer's head below the Ford logo, which identified the Ranchero -- as if it needed it.

The Rancheros came in two series, standard and Custom. The first was as spartan as a parson's Plymouth and was available in a limited selection of colors and interior schemes. It was priced at $2098. For a mere $51 additional, a buyer could move up to Pat Boone's Custom model with all the trimmings. These included chrome sidespear, dual sun visors, horn ring, and full custom door panels and seat (basically Del Rio wagon trappings). The Custom also sported bright metal trim that framed the rear window and then swept down and around the top edges of the bed. Contrary to popular belief, the gold anodized side trim (as seen on the Custom 300 cars) was not standard on the Custom Ranchero -- this was a dealer item in 1957. Taking a cue from the Australians, aftermarket suppliers offered tonneau covers and chrome guard rails.

Ford Rancheros could be purchased with no fancy trimmings or completely decked out.
kihioh

Ranchero Custom interiors gave buyers a choice of white bolsters with tan/brown, white/blue, red, or green vinyl facings, all in much more attractive patterns than the standard model. The most distinguishing feature of the 1957 Ranchero Custom was the choice of two-tones, 10 in all. The upper portion of the body and roof pillars were always Colonial White. The lower bodysides and roof itself carried the second color, which was frequently Flame Red, Starmist Blue, or Raven Black. The two-tone jobs were optional, as were the dressier full-disc hubcaps and whitewalls.

Ford's approach to advertising its new car/pickup centered around its double-duty nature: "LOOK ... a handsome caller. LOOK again ... a husky hauler." Billed as "an entirely new kind of vehicle," Ford asserted that "there's the big bonus that only the Ranchero gives you-profits plus pleasure. After the day's work is done, Ranchero's ready for the evening's fun. It's the only pickup truck that rides, handles and feels exactly like a car!" Among the other selling points were the availability of virtually all of the luxury and convenience options available on Ford cars (power steering, brakes, windows, and seat, for example), plus the fact that the Ranchero had more load capacity than many standard pickups, a six-foot-long pickup bed, a lower loading height than any pickup, and a "sizeable space" behind the driver's seat for small packages (the spare tire resided on the passenger's side).

For a specialty model, first year sales could be considered a success: 6429 standard Rancheros and 15,277 Customs, this in addition to total 1957 Ford passenger car production of 1,676,449 units. With or without the Ranchero, however, Ford clearly outsold Chevrolet in 1957 for the first time since the Thirties.

To learn more about the 1958 Ford Ranchero, continue on to the next page.