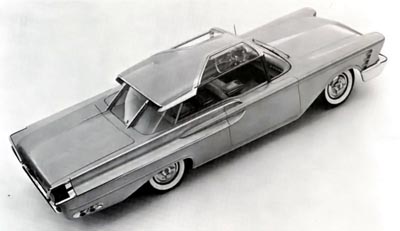 The experimental 1956 Mercury XM-Turnpike Cruiser was developed as a show car and paved the way for the Cruisers in 1957 and 1958.
©2007 Publications International, Ltd.

Show cars influenced much of Ford's production styling in the Fifties, but the 1957 Mercury was an exception. Like the 1956 Lincoln, it was an original. The show car it most resembled, the experimental XM-Turnpike Cruiser of 1956, came after the basic production design had been developed. Interestingly, it was built in late 1955 by Ghia in Italy, thus foreshadowing Ford's acquisition of the famed coachbuilder in the Seventies.

Carted around the country in a semitrailer with big picture windows on each side, the XM-Turnpike Cruiser was described as "not merely a 'dream' car. It is a full-scale, fully operative automotive styling laboratory dedicated to ... pioneering, testing, and perfecting new ideas in design, new features, new safety and new power application."

Its most obvious departure from production 1957 styling was the roof, a sort of early T-top design with a wrapped backlight surmounted by overhanging sections at the C-pillars. Twin plastic "butterfly" roof panels, hinged from the T, flipped up when the doors opened to facilitate entry, a necessity with the low, 52.4-inch overall height. The center portion of the three-section backlight could be lowered for ventilation as on the production Turnpike Cruiser, a feature continued on the 1958-1960 Continentals and the "Breeze-way" Mercurys of 1963-1968.

Other differences included twin, chrome-plated exhausts exiting from the lower rear fenders, near-vertical A-pillars instead of the production models' angled "doglegs," and a blunt front end with chrome half-bumpers, each carrying "twin jet pods." Inside were four leather-covered bucket-type seats and a quartet of "chrome-edged cylinders" housing full instrumentation.

The XM Cruiser became one of Ford's most famous show cars, and rumors persisted for years that it was still around. Ford's policy in those days was to destroy its show cars after it had finished with them. As the story goes, the person sent to demolish this one just didn't have the heart, and instead hid it in the Michigan woods, where it turned up much later. That may be true, but the car's whereabouts remain a mystery.