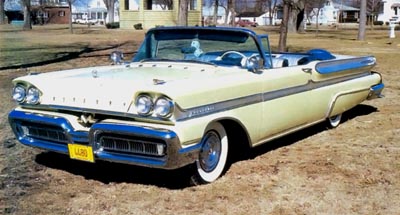 For 1958, the Mercury Turnpike Cruiser hardtops became part of the Montclair series and the Convertible Cruiser vanished, though this soft-top Montclair is close to what the latter would have been.
©2007 Publications International, Ltd.

The 1957 Mercury Turnpike Cruisers netted some glowing reviews, but the kudos must have gone unheeded, for the Cruiser was a sales dud. Model year 1957 production was a pathetic 16,861 units, including a mere 1,265 convertibles. Poor workmanship and all those troublesome electrical gadgets were partly to blame, but a more important factor was the national economy, which was going nowhere but down by the time the 1958s appeared.

Mercury retrenched. The Cruiser convertible was dropped and the hardtop coupe and sedan were demoted to the Montclair series at prices cut to $3,498 and $3,577, respectively. Taking over at the top of the line was the posh Park Lane, offering the same three body styles on a new 125-inch wheelbase, while the Medalist returned as the budget line in response to the fast-sinking demand for medium-price cars. All models were mildly facelifted with a bolder grille, quad headlamps, and little chrome rockets in the rear fender scallops. The Cruiser's standup rear deck medallion was moved inside and now lighted up at night.

There was also an extra-cost 400-horsepower setup with triple two-barrel carbs and special manifolding, something even Lincoln didn't have. Transmission was now your choice of an improved Merc-O-Matic or new "Multi-Matic." Both were excellent. A pity they were still stuck with pushbutton control, which was more prone to get out of whack than a conventional selector and trickier to use.

This big-block V-8 was a milestone engine for Ford. Though Mercury had it only through 1960, Lincoln offered the 430 (only) all the way through 1965. Notable design features began with wedge-shaped combustion chambers entirely within the block, with the top of each bank cast at a 10-degree angle to cylinder bore, and perfectly flat head bottoms permitting larger valves. The heads were designed so that no two exhaust valves were adjacent, and compression in all cylinders was exactly the same. Also, the rocker-arm assembly was greatly simplified, and spark plugs were much more accessible than on the 312.

Mercury planned on making air suspension available for 1958, but it never materialized. That's probably just as well, considering the lack of success other makers had with their setups. Minor improvements to the standard suspension plus better brakes made roadability all it should have been on the 1957s. Performance was still good, with 0-60 mph in well under 10 seconds, but lower axle ratios kept the bigger 1958 engines from realizing their full potential. Like everyone else in the industry, Mercury was trying to squeeze out all the fuel mileage it could for a market that was suddenly economy-conscious.

Many 1958 Turnpike Cruisers had optional air conditioning that was markedly better than the 1957 system. McCahill described it as "providing enough cold air inside the car to freeze an Eskimo's eyeballs while crossing Death Valley." He summed up all the 1958 Mercurys as "the most different-looking cars on the road...as quiet as a Scotchman when the check is passed."

Despite its bigger engines and flashy three-tone paint jobs, the 1958 Turnpike Cruiser was on a dead-end road. The import invasion was underway, and overblown tanks like this were hardly Detroit's best defense against the sharp recession. From 286,163 units for model year 1957, Mercury production dropped to 153,271 for 1958. Just 6,407 were Turnpike Cruisers.

Reith had been wrong: the public wasn't clamoring for the ultimate Detroit dreamboat. Lincoln and Mercury remerged in mid-1957, and absorbed Edsel Division by year's end. Needless to say, Reith left.

The Turnpike Cruiser has yet to become a hot collector's item, not even the low-volume convertible. But perhaps it deserves to be. As one of the great artifacts from the age of automotive excess, it was the wrong product with the wrong features, built at the wrong time and for all the wrong reasons. Yet kitsch has a certain place in our lives, if only to remind us of the fine line between taste and tastelessness. The Turnpike Cruiser crossed that line decisively, as kitschy as a Fifties car ever got. And that's why it will be remembered. That and the moral it teaches: some dreams are best forgotten.