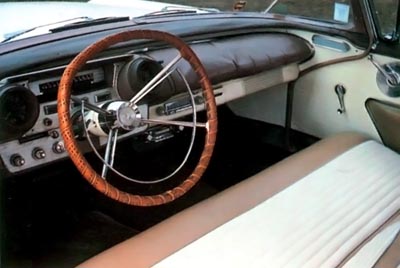 Mercury's 1957 Turnpike Cruiser equipment was predictably lavish and heavy on gadgetry. Besides the big V-8 you got Merc-O-Matic transmission with trendy "Keyboard Control" pushbuttons a la Chrysler, plus power steering and brakes, a special steering-wheel flattened at the top for a better view of the road, quad headlamps (where legal), plus a "Monitor Control Panel" with tachometer and "Average-Speed Computer Clock." And, oh yes: a map showing all U.S. turnpikes as of 1957.

The real wowie items were "Seat-O-Matic" memory seat, an electrically retractable rear window for "Breeze-way Ventilation," and twin air intakes at the top corners of the "Skylight Dual-Curve" windshield, each housing a small, horizontal radio antenna.

With all this, the Turnpike Cruiser came about as close to the fully automated "car of tomorrow" as Fifties technology allowed, and some of its features have electronic counterparts today. Trouble was, this dream car was something of a nightmare. Take the roof-level air intakes. Contrived to hide a structural break necessitated by the curvature of that huge windshield, they leaked water even when closed and likely caused many a head cold.

Still, with the side windows up and the backlight cracked open an inch, this bizarre setup was excellent, an early example of the flow-through ventilation we now take for granted. In some ways, it was even better than the optional air conditioning, which was barely up to the task.

More amusing was "Seat-O-Matic," which allowed you to preset a desired front seat position via a pair of dials in a dash-mounted pod. Select fore/aft location from "1" to "7," height from "A" to "E." Switch off the ignition and the seat automatically sank all the way down and back to facilitate entry/exit. Twist the key and the seat would assume the programmed setting.

But you had to remember one thing: never buckle up before the seat completed its adagio dance or the belt could squeeze you to death. The "Computer Clock" required a real genius to figure out. If you could, it would calculate your average trip speed. It also housed a trip odometer, an item most Detroit cars forgot in the Fifties.

Roof-level air intakes were contrived to hide a structural break necessitated by the curvature of that huge windshield.
©2007 Publications International, Ltd.

Less publicized than the gadgets were a number of standard safety features: padded sunvisors and dash, rubber housings for tach and clock, a deep-dish steering wheel, and the wrapped "V-angle" taillights that functioned like today's government-required side marker lamps. Seatbelts were optional, as was a child's pullover safety harness, and the sliding interior door locks were less injurious as well as less accessible for thieves. But all this praiseworthy stuff was negated by the extensive use of chrome and stainless steel that made the inside of a Cruiser as dazzling as the outside.

Continue to the next page to find out what reviewers thought about the 1957 Turnpike Cruiser's performance.