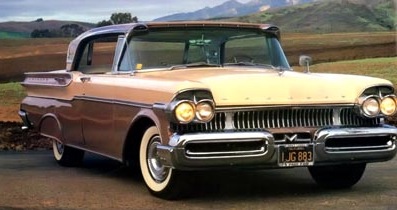 During World War II, car-starved America dined on a steady diet of futuristic new designs not unlike that of the Mercury Turnpike Cruiser, cars that presumably would appear as soon as peace returned. Cooked up by artists and writers for numerous magazine articles, they promised "Buck Rogers" styling, transparent roofs, and mysterious new sources of power. Some might even fly. Above all, the postwar car would be loaded with wonders derived from wartime technology. But for the most part, these dreams never came true. They were too costly and impractical for the real world, and there was simply no need for anything radically different once the booming postwar seller's market became apparent.

With the Fifties dawned the space age, which only whetted buyers' appetites for gadgets, glitter, and go. Detroit responded in part with an annual crop of fascinating, futuristic show cars. Bristling with new concepts being considered for production, they served the very important purpose of gauging public reaction to those ideas. Eventually, some of their styling and engineering features did make it to the showroom. But though the street models were more down-to-earth, they were, by and large, pretty ghastly. Perhaps the worst of these mid-century spaceboats was the one actually trumpeted as a "Dream-Car Design": Mercury's Turnpike Cruiser.

The story begins in 1955, when Ford Motor Company decided to split Lincoln and Mercury into separate divisions. Named to head the latter was Francis C. "Jack" Reith, one of the 10 original "Whiz Kids" recruited in the Forties by then-new company president Henry Ford II. Up to now, Mercury had been simply a deluxe Ford -- except for 1949-1951, when it was a sort of "junior Lincoln." Reith rightly reasoned that Dearborn needed a third bodyshell for a new group of cars to compete with GM's medium- and upper-medium-price models. Based on his recommendations, it was decided to give Mercury its own distinct structure for 1957. This would then be given suitably different outer sheet-metal for the upper-crust offerings in the new Edsel line being planned for 1958.

In essence, the new "Big M" was a less extreme version of the XM-Turnpike Cruiser hardtop coupe, a square-lined 1956 showmobile. Featured were "concave side channel" rear fenders, canted V-shaped taillamps, "compound wraparound" windshield (curved at the top as well as the sides), near-flat hoodline, and a modest grille set above a split bumper. Though some of these elements were exaggerated and the twin "butterfly" plastic roof panels merely fanciful, the XM was a remarkably accurate preview of the forthcoming 1957s, especially the production Turnpike Cruiser.

On the next page, learn about the design for the futuristic Mercury Turnpike Cruiser.