The 1957-1958 Buick Caballero and Special Riviera Estate are prime examples of a short-lived and little-loved Detroit trend: the pillarless hardtop wagon.

The all-steel station wagon and the pillarless hardtop were the two major body innovations of the early postwar years. Both found a ready market -- hardtops enormously so -- though for different reasons.

Steel wagons were nowhere near the hassle their structural-wood predecessors had been, demanding much less upkeep and proving far more resistance to squeaks, rattles, and loosening-up with age. Bereft of B-posts, hardtops offered the sort of style and airiness associated with convertibles, plus sedan-like safety and weather protection -- a well-nigh irresistible combination.

It was thus only a matter of time before these two influential ideas were combined in one car, and it didn't take long. General Motors, which pioneered mass-production "hardtop-convertibles" in 1949, showed the way with its new Chevrolet Nomad and Pontiac Safari for 1955. Though both had B-posts, they were the sleekest wagons ever: two-door models with thin C-and D-pillars and vast expanses of side glass wrapped around to one-piece tailgates with drop-down windows.

But it was tiny American Motors that offered the first true hardtop wagon: the four-door Rambler Custom Cross Country of 1956. It was a logical follow-up to the 1955 arrival of pillarless hardtop sedans -- another GM innovation -- though AMC had already planned the Cross-Country as well as Rambler four-door hardtops.

Other makes fielded hardtop sedans for 1956 -- most everyone, in fact, save Lincoln, struggling Studebaker-Packard, and Nash/Hudson at AMC. A few followed AMC by venturing into pillarless wagons for 1957, among them Oldsmobile and Mercury -- and Buick.

Buick, of course, was no stranger to hardtops. It had shared honors with Oldsmobile and Cadillac for the first series-production pillarless coupes of 1949, with Oldsmobile for the first four-door hardtops of mid-1955. In the process, Buick helped start the period practice of special names for hardtop models, which produced such romantic appellations as Victoria (Ford), Bel Air (Chevrolet), Catalina (Pontiac), Belvedere (Plymouth), Starliner (Studebaker), and of course the original trio of Holiday (Oldsmobile), Coupe de Ville (Cadillac), and Buick's own Riviera.

Go the next page to read more about the features and styling of the 1957-1958 Buick Caballero and Special Riviera Estate. 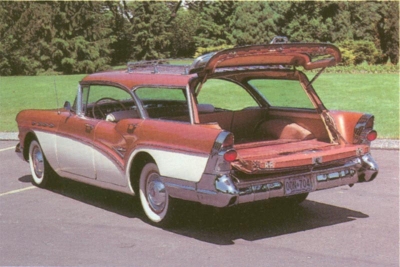 The 1957-1958 Buick Caballero/Special Riviera Estate were Buick's entry into the new (and short-lived) hardtop hauler market. The Riviera Estate Wagon was a $3,167 entry in the low-priced Special series, all but identical with a pillared counterpart costing $120 less.

The colorfully named Century Caballero was much the same thing save a $3,706 price tag, four instead of three front-fender "portholes" (as used on Centuries since 1955), and a more potent version of the division's newly enlarged 364-cubic-inch V-8 with 300 instead of 250 horsepower.

On all three, the rear half of the roof bore longitudinal indentations, inspired by stylist Carl Renner's crosswise ribbing on the Nomad/Safari, and an aft superstructure with a slightly curved liftgate window mated to a graceful hardtop-style main greenhouse.

Though pleasantly breezy and as practical as any wagon, the Caballero and Riviera Estate suffered the usual hardtop handicap of noisy air leaks with the side windows up -- reflecting the relatively greater flexibility and poorer weather-sealing of pillarless bodies -- and Buick's growing reputation at the time for poor brakes and indifferent workmanship.

Neither model was much help in a year when Buick fell from third to fourth in the industry on volume that fell to half of what it had been in banner 1955. Of course, wagons have never sold as well as closed models with trunks, but these Buicks were harder to move than most. The Riviera Estate attracted only 6,817 buyers, versus 23,000-plus for its pillared sister. Perhaps because of its better performance, the Caballero saw 10,186 built -- still nothing to rave about.

Output fell even further for 1958: just 3,420 and 4,456 respectively. The reason wasn't so much their faults as either hardtops or wagons as the "Air Born B-58 Buicks" in general -- as wrong for that recession year as any medium-price car. Not that it mattered, because the public quickly tired of hardtop wagons -- which only makes Chrysler's belated early-1960s models seem all the more curious. Buick bailed out after 1958 as new managers began bringing General Motors to its senses -- and more sensible cars.

Despite higher production, the Caballero has greater collector appeal than the pillarless Special because it's a Century, though like all wagons it's less desired than a convertible or hardtop. Still, these Buicks are worth seeking out as a nostalgic reminder of a time when Detroit thought it could get away with almost anything.

Go to the next page to read the specifications of the 1957-1958 Buick Caballero and Special Riviera Estate.

The Caballero was more powerful (and popular) than the Special Riviera Estate.
©2007 Publications International, Ltd.

The 1957-1958 Buick Caballero/Special Riviera Estate didn't offer much to write home about, performance-wise, although the Century Caballero boasted an upgraded engine that could achieve 300 horsepower.