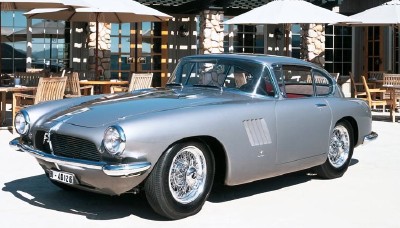 This 1956 Pegaso is one of just three with a custom body by Touring of Milan. See more pictures of sports cars.

In a way, every great car is a memorial. It is a testament to the vision and skill of those who designed, engineered, constructed, and perhaps raced it. But Jack and Vi Vopal's 1956 Pegaso Z-102 Panoramica Coupe is a memorial of a different kind. Now a restored award winner at the most prestigious shows, it recalls the memory of the Vopals' late son, Jeff, who got them to buy the car in the first place.

As the Vopals tell it, Jeff located the two Pegasos they now own in 1972, when he was 18. Father and son planned to restore them as a shared project, but college and employment away from home kept Jeff busy until 1990.

Then, when he moved back to within three miles of his parents' home in Simi Valley, California, plans began afresh to restore the Zagatos -- including the car featured here, one of just three built with the Panoramica body by coachbuilder Touring, of Milan, Italy.

However, in March 1992, Jeff Vopal was diagnosed with lymphoma. He died six months later, just days after his 38th birthday.

Jack and Jeff Vopal had regularly attended the Pebble Beach Concours d'Ele­gance, but the senior Vopal needed to be coaxed to go to the 1993 event by his daughter and son-in-law, Cindy and Karl Baker. There they learned that Pegaso was to be the featured marque in '94, and they were invited to display one of their very rare Spanish sports cars, even if not in running condition.

The Vopals and Bakers decided that, in Jeff's memory, they would get one of the cars operable for Pebble Beach '94. But the more things they cleaned up, the more they wanted to do. Fifty-one weeks later, they had a fully restored car to show at Pebble Beach.

Under the custom body sits a 3.2-liter dual-overhead-cam hemispherical-head V-8. With an 11.0:1 compression ratio, and breathing through twin Weber four-barrel carburetors, it develops 270 horsepower.

The Vopals' Z-102 Pano­ram­ica has won more than 80 awards since its restoration. It's now a fitting memorial to those who designed and built the cars, and to the memory of a beloved son and brother.