Sales for the 1956 Packard Executive 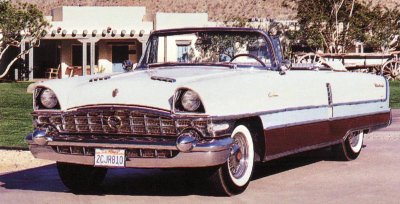 The Executive attempted to transfer Packard prestige onto the smaller, lighter Clipper chassis.

James Nance knew his company was in trouble well before it introduced the 1956 Packard Executive. As early as October 1955, he had lamented the month's sales statistics, telling Roger Bremer, "everything possible is going to have to be done to get this thing turned around -- and fast...get the business operating in the black [and] get the operations in line to come closer to the targets that we gave to the financial institutions of a break-even point of 65,000 units and a $10 million profit at 80,000 units."

In February 1956, he advised Bob Laughna of Purchasing and Production Control to "retrieve all copies of [our sales] figures and take them out of circulation, for obvious reasons. Please send me instead a program predicated on moving a wholesale domestic minimum of 60,000 units for the calendar year of 1956...[Fifty thousand] is our required minimum to keep from incurring horrendous losses."

Packard-Clipper combined production hit nearly 70,000 for calendar 1955, mostly on the strength of the heavily facelifted line of cars and new V-8 engines; but for all of 1956, the figure would plummet to 13,432.

Packard-Clipper Division had planned an all-new body for 1957, with the Executive sharing fully the bodywork of the senior Packard Patrician, Four Hundred, and Caribbean. Clippers were slated to share a smaller body with Studebakers. But the new body program was going to cost $30 million, the greater part of a $50 million line of credit S-P needed. By spring 1956, inevitably influenced by the sales figures Nance couldn't hide, the insurance companies that backed the corporation refused to lend more.

Various doomsday plans were then considered, including moving the whole operation to Studebaker's South Bend plant, discontinuing Packard, discontinuing Clipper, discontinuing them both, or discontinuing the entire company by filing for bankruptcy. Nance desperately tried to develop bailouts: body sharing with Lincoln, a buyer to take Packard-Clipper off his hands -- but none of these worked out.

By late May 1956, S-P was faced with the only offer short of bankruptcy, a management agreement with Curtiss-Wright, the aircraft manufacturer. In exchange for needed operating funds, Studebaker-Packard -- "gasping like a wounded bass," in the words of auto writer Tom McCahill -- accepted Curtiss-Wright management, distribution of Daimler-Benz vehicles in the United States, and, by July, consolidation of all automotive operations at South Bend.

The last day of production at Packard's plant on Conner Avenue in Detroit, where assembly had shifted for 1955, was June 25, 1956. That day 24 Clippers and 18 Packards were driven off the line. Production for the model year was 18,482 Clippers and 10,353 Packards, including the 2,815 Packard Executives.