Marketing of the 1956 Packard Executive 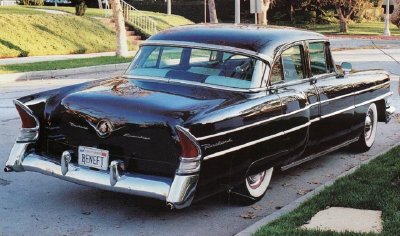 Packard made it possible to go with a more sedate single-color look.

Packard tried many tactics to boost sales of the 1956 Packard Executive. Officially registering Clipper as a separate make from the 1956 Packard Executive, James Nance changed its producer's name to "Packard-Clipper Division," offered dealers separate "Packard" and "Clipper" signs, and removed the Packard name altogether from the new 1956 Clippers. But his victory was short-lived.

On January 6, 1956, following remonstrances from product planner Roger Bremer, Packard script was reapplied to the Clipper deck. Later it was even made available as a retrofit item for previous Clippers. This was one of the rare occasions when Nance's will was thwarted by his underlings, leaving him grumbling that "drifting without a policy is deadly, as evidenced by Packard's fatal mistake of doing so since 1938."

The appearance of the Executive, a Clipper with a Packard front end and Packard name, was just another step away from Nance's announced policy. "This was obviously a return to the practice of 'selling the Packard name' on a cheaper car," wrote George Hamlin and Dwight Heinmuller in Packard: A History of the Motorcar and the Company, "an idea that had worked in 1935 but which Nance himself had said was 'bleeding the Packard name white' in 1952. The Executive further demoralized the field force...its invitation 'to enter the luxury car class now -- at a modest investment' was a clear signal to anyone with eyes that something was very wrong at East Grand Boulevard."

A high grade of materials was used on interiors, which generally came in two-tone motifs.

The Executive's impact on the morale of the field force is debatable; it's possible that the field force never noticed. Hamlin and Heinmuller say the new model "sold as fast as it was produced." If so, production was geared to the snail's pace of sales. By the time the Executive was introduced in early 1956, dealers were deserting at the rate of 20 a month, and rumors were rife that the 1956 Packards would be the last ever. This added irony to insult, because the 1956s were generally improved from the 1955s, with many unique features, like pushbutton Twin Ultramatic transmission, self-leveling torsion-bar suspension, and one of the most powerful V-8s in the industry.

Decidedly pointed at both ends, the Executive appeared to have genuine luxury car proportions.

Of course all this is hindsight, which is far too easily indulged, and you are here to read about the Packard Executive, which was a good buy for the money. Introduced as a car for "the young man on the way up," it was in fact a modified 1956 Clipper Custom, which had been dropped to make room for it. Like the Custom, it consisted of two body styles, a four-door sedan and two-door hardtop; but it violated Nance's strict Packard/Clipper separation doctrine in both power and size. Its engine, unlike all the other 1956 Packards, was the Clipper Custom's 352-cid, 275-bhp V-8, and it rode the 122-inch Clipper chassis.

Thus it was down 15 to 35 horsepower from the 374-cid Packard V-8, and five inches in wheelbase: a "junior" car in traditional Packard parlance. "Actually the car is more in the nature of an upper-crust Clipper Custom than a poor man's Packard Patrician, having more in common with the Clipper," wrote Motor Life's Ken Fermoyle.