Development of the 1956 Packard Executive 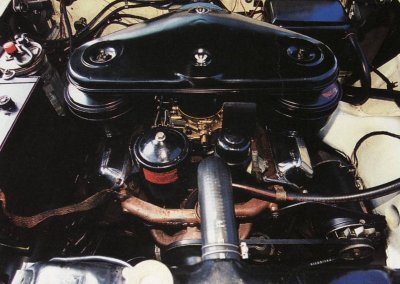 As Packard moved toward the 1956 Packard Executive, the manufacturer began to leave behind some of their older and more inexpensive models. Luxury products were relegated to what amounted to a sideline. In 1946, the first model year after the war, Packard's best seller was a Clipper Six that started at $1,680, while Cadillac's most popular model was an eight-cylinder Series 62 that racked up similar sales with starting prices between $2,300 and $2,600.

In 1948, Packard face-lifted and added a station wagon, while Cadillac restyled and -- for 1949 -- added an overhead valve V-8. By 1950, Cadillac was building almost 100,000 cars a year priced over $3,000, while Packard was building about 2,500 (and that's an optimistic guess). Said James Nance of the previous Packard managers, "They just turned the luxury car business over to Cadillac on a platter."

It took a marketing man like Nance to understand this serious departure from the one field where Packard had always excelled, and to his credit, he tried to correct the error. From the beginning of his tenure, he fought to separate the name "Packard" from the lower-priced models, which he wanted to call "Clippers." The only excuse for building Clippers, he said, "is to get volume to support the factory and our dealer organization."

What Nance wanted was more emphasis on Packards to fling robustly against their traditional luxury competitors. He was resisted by dealers used to selling cheaper cars, and by older managers brought in during the One Twenty years, when cheaper cars were the only things the company could sell.

Executives had a stick shift with a blank shift quadrant.

By introduction time for the 1956 models, Nance seemed to have worn down his opposition. "Ward's are now reporting Packards and Clippers as two separate lines of cars," he wrote his dubious sales manager, Dan O'Madigan, with evident satisfaction; "the franchises are physically split, although nothing much is being done about it in field application; but most importantly, we have involved ourselves in a tooling program for the company on two separate lines...expenditure for face-lifting the 1956 cars is twice what it was [in past similar years] because we are face-lifting two, not one, lines."

A number of strategies were cooked up by Packard to market the Executive. To learn how the 1956 Packard Executive was presented to the public, see the next page.