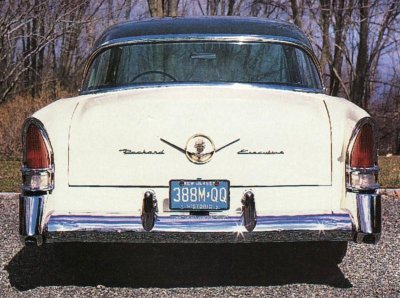 The 1956 Packard Executive was something of an anomaly for this automaker. Packard President James Nance had no great love for medium-priced cars parading around wearing the name of the great luxury marquee. But that's exactly the kind of car his company released in 1956 for what turned out to be the last completely new model in the firm's history.

Anyone who followed the automobile business could tell by the March 1956 announcement of the Packard Executive that the old company, which had merged with Studebaker two years before, was in trouble. For four years Packard's top management had been insisting that the Packard name be used only on luxury cars -- now here they were again, applying it to cars that sold for the price of a Buick.

Whether management's rationale was right or not, the Executive arrived too late to change anything, and only 2815 were built. Given the state of Studebaker-Packard fortunes, it really didn't matter how many were sold. The Executive went down in history only as the last "true" Packard ever introduced, if we don't count the Studebaker-based ersatz-Packards of 1957-1958.

Automotive insiders in 1956 recognized the Executive as a desperation tactic because it contradicted the marketing plan adopted by James J. Nance when he became Packard president in 1952. ("The new Packard is more a product of production line sleight-of-hand than of the engineering laboratory or styling studio," said Car Life of the Executive in its August 1956 issue.) Nance's approach had been logical and correct. Packard, he knew, had been a watchword for luxury and class for nearly half a century, at least since the mighty Six, the "boss of the road," was introduced for 1912.

In 1935, to save itself, Packard moved seriously down-market with the One Twenty although that car was brilliantly engineered, and by no means cheap. In 1937, greedy for the mass market the One Twenty had uncovered, Packard added a new, much less mighty Six, which was cheap, though equally well built. You could buy a 1937 Six for the price of a Pontiac.

Packard knew it needed to make a change in order to save the brand. On the next page, learn how the concept for the 1956 Packard Executive was developed.