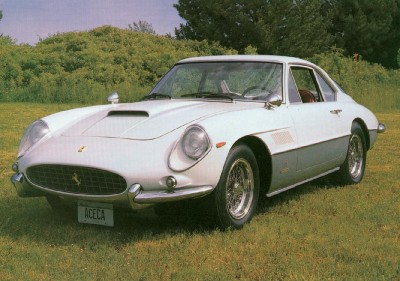 For the 400 Superamerica, Ferrari shed the Lampredi V-12 in favor of a Colombo-based V-12.

Changes happened quickly for the 1964, 1965, and 1966 Ferrari Superamerica and Superfast. Less than two months passed between delivery of the last 400 in January 1964 and the presentation of its replacement -- the 500 Superfast -- at the Geneva Salon in March 1964.

Similarities could be found between the 400 and 500 in overall body configuration, although the new car had less surface embellishment and was not as interesting aesthetically. The headlights were in the more normal style and not covered as before, and the rear of the body sported a chopped-off Kamm-type tail.

The engine stood out as the car's unique feature by using the long block typical of the Lampredi engines but with removable cylinder heads like the Colombo engines. The 88 x 68-mm bore and stroke resulted in a displacement of 4,962 cc, so the 500 designation came from its displacement figured in deciliters. The engine was rated at 400 horsepower at 6,500 rpm, and the transmission remained a four-speed with overdrive.

The second series of Superfasts received a number of revisions. Most notably, the four-speed plus overdrive gave way to a genuine fully synchronized five-speed gearbox, and the 11 front fender air outlet louvers were replaced by a panel with three openings. Twelve of the second series cars were built before the 500 Superfast was phased out in 1967.

The large, powerful, and luxurious Ferraris were truly the "Super" cars of the line, totally justifying their Superamerica and Superfast designations. Their very size and weight, however, rendered them less enjoyable to drive than the smaller Ferraris, at least for true enthusiasts.

But the buyer of a Super series car was not perceived as an enthusiast anyway. The car made for excellent long distance cruising, albeit with limited luggage capacity and none of the familiar creature comforts such as air conditioning, automatic transmission, or cruise control -- items that were becoming necessities for the affluent American buyer in the 1950s and 1960s.

Since the 400 Superamericas were custom built, buyers could, and did, individualize them.

With total production numbering a few more than 100, the Supers' sales possibilities were limited. However, they probably did as well as Enzo Ferrari had expected or wanted. He was busy with more important things, after all -- like winning races.

The Superamerica and the Superfast justified their names because they were the "Super" cars of the Ferrari line. They've always been collectible, but Ferrari prices are soaring these days.