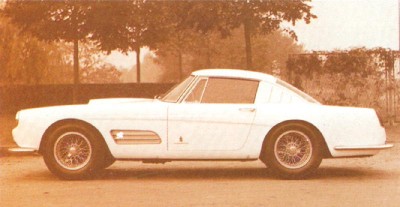 This is the first production 400 SA, seen in Brussels and New York in early 1960.

The Ferrari Superamerica and Superfast went through plenty of changes from 1960 to 1963, beginning with a new model. The 400 Superamerica bowed at the Brussels Auto Salon in January 1960. It boasted new styling, a Colombo-designed V-12, and a shortened wheelbase.

The car shown, a two-place cabriolet by Pininfarina (the name was legally changed to one word in 1960), made a further departure from the past.

Ferrari claimed 400 horsepower at 7,000 rpm, but that seems unlikely since the last 410 was also rated at 400 horsepower (at 6,500 rpm), and that with an extra liter of displacement. The Colombo-based engine, unlike that of the 410, had removable cylinder heads.

Six cabriolets were built in 1960 -- all virtually identical, except for one Speciale, which had faired-in headlights like a Spyder California. A removable hardtop was offered and several of the open cars were so equipped.

At the Turin show in 1960, Superfast II made its first public outing. Ferrari boasted that the aerodynamic body design had been created in a wind tunnel. Its shape, reminiscent of a fat airplane wing, featured headlights that retracted into the nose of the body.

Superfast II was first seen at the Turin Salon in 1960.

In the winter of 1961-1962, a hood scoop was added, the rear fender skirts were removed, and the headlights moved into the front of the fenders to be covered by curved plastic. The revised body became the "standard" 400 Superamerica.

Superfast III made its initial appearance at the Geneva Salon in March 1962. It reverted back to wearing rear fender skirts and using retractable headlights, featured a more open greenhouse, and had a thermostatically controlled radiator cover.

Superfast IV appeared soon after III, with the general look of its predecessor but now with four headlights minus the covers. In view of the fact that Superfast II has disappeared, Ferrari historians believe that IV was probably built on the II chassis. Never shown, Superfast IV was later sold in the U.S.

The four-eyed Superfast IV of 1962 was shown with and without the hood scoop.

At the end of 1962, the Superamerica saw some significant changes. The wheelbase was lengthened to the same 102.4 inches of the earlier Superamerica, with the extra length devoted to luggage capacity; no 2+2 version was ever seen.

The hood air scoop disappeared, and the last examples had a simple bulge to cover the carburetors. The rear fender skirts were gone for good. When the 400 Superamerica went out of production at the end of 1963, about 19 cars had been built through the year, including several cabriolets.

The coupe version of the 400 was referred to in factory literature was the "PF coupe Aerodinamico." Total production of the 400 amounted to about 48 cars, built between late 1959 and 1963.