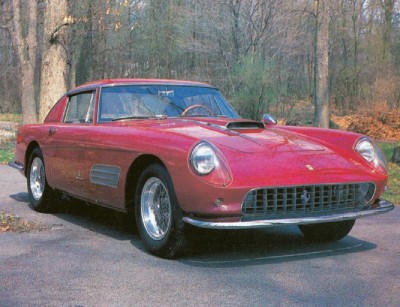 The third series Superamerica entered production in 1959 but would soon be replaced by a new SA.

When the third series Superamerica entered production early in 1959, the rear quarter window had been replaced by a metal panel with three vertical vent louvers -- like those on the second Superfast of 1957 -- and the vent wings were back.

Approximately 12 to 15 of the third series cars were built in 1959 (no one seems to know the exact number), all bodied by Pinin Farina. Like the previous versions, they were basically alike but with minor detail and trim variations. The last four or five produced apparently had a more conventional headlight treatment without the clear plastic covers.

A strange-looking Superamerica showed up at the 1959 Turin show, the first, apparently, of the upcoming 400 series. Its body was rather plain looking and squared-off, featuring a large, square grille filled by a very fine eggcrate insert. It also featured quad headlights -- another copy of an American styling craze.

This odd-looking Ferrari Superamerica was displayed at the 1959 Turin show.

The greenhouse looked very light because of a wraparound windshield and thin B pillar behind the door. This airy top design and large glass area might have looked good on some cars, but on the Superamerica's heavy and ponderous body it looked out of place.

The car was sold to Gianni Agnelli (later to head Fiat), and eventually found its way to America, where it was donated to the William F. Harah Automobile Foundation in a sad state of repair. It had been crashed, and the entire front end sheet metal along with the windshield needed replacement.

The new 400 Superamerica differed significantly from its predecessor, even to the way it received its model designation. Up through the 410, the numbers represented the displacement for each cylinder in cubic centimeters, rounded off to the nearest 10. Thus, a 250 V-12 displaced 3,000 cc, the 410 -- actually, about 413 -- almost 5,000 cc. For the first time in Ferrari history, starting with the 400, the number indicated the displacement in deciliters -- about 4,000 cc total, rounded off.

For the 400, Ferrari abandoned the use of the long-block Lampredi V-12. Instead, the car was powered by a development of the Colombo design that dated back to 1947. It placed the plugs on the outside of the V and used coil valve springs instead of hairpin springs.

The multiple-disc clutch of the 410 was replaced by a single dry-plate clutch, and the four-speed transmission now had a British Laycock de Normanville electrically actuated overdrive behind the gearbox. The wheelbase had changed, too, from the 410's 102.4 inches to 95.3 inches. Also, the lever-action hydraulic shock absorbers were replaced by Koni telescopic units, and four-wheel Dunlop disc brakes became standard.

To follow the Superamerica and Superfast story from 1960 to 1963, continue on to the next page.