1957 and 1958 Ferrari Superamerica and Superfast 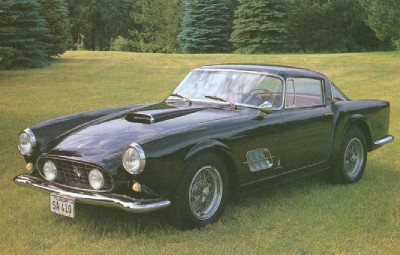 Note the side vents on this 1957 Superamerica; they varied a bit from car to car.

Body configuration continued as on previous Farina-built models, and the shorter wheelbase usually went unnoticed (the length reduction having been taken out of the doors). Seven of the "standard" Farina-designed models were produced, with minor variations between them.

Two special second series 410s were also built -- one a tail-finned, somewhat rounded coupe by Scaglietti, the other a second Superfast by Pinin Farina.

The former used a stainless-steel top and strutted enough chrome trim to be unusual for both Scaglietti and Ferrari. The overall shape wasn't bad, but the use of two-tone paint in addition to the excess brightwork made the final result questionable to some.

Inside the 1957 Superamerica, the driver faced a big speedometer and tachometer; the auxiliary gauges were mounted in the center of the dash.

The second Superfast wore a front end treatment similar to that of the first but did not share its rear fenders. That car, sold to American Jan de Vroom after the 1957 Turin Auto Show, was the subject of a road test by Sports Cars Illustrated for its September 1958 issue. It flew through the quarter mile in 13.9 seconds with a terminal speed of 108 mph, making it the fastest car the magazine had ever tested.

The Paris Auto Salon in October 1958 saw the third series Ferrari 410 Superamerica make its debut. It had received changes to the engine, transmission, brakes, and body design. Spark plugs, for example, moved from inside the V to outside the heads, adopting the setup used in the Testa Rossa.

Pinin Farina's body design bore a slight resemblance to the 1956 Superfast, but was more practical from the standpoint of everyday use. The headlights sported curved clear plastic covers, while the radiator opening forsook the flattened ellipse seen on previous Superamericas. In fact, the front end looked more like a California Spyder than it did a Superamerica.

This 410 Ferrari Superamerica was the Geneva and Turin show car in 1957.

A sculpture line ran from the top of the front wheel arch, curving slightly down to the rear wheel opening, and the side air outlet grilles on the front fenders had five vertical slats and three horizontal bars. The rear end of the new 410 boasted a design that Farina would also use on the 1959-1961 250 GT coupes.

The greenhouse looked lighter, having large quarter windows behind the doors, which had no vent wings, and a smaller non-wraparound rear window. The 410 seen at Paris was painted in a two-tone color scheme, but the same car arrived at the Turin show a few weeks later in solid dark green metallic.

To follow the Ferrari Superamerica and Superfast into 1959, continue on to the next page.