Changes to the 1956 Ferrari 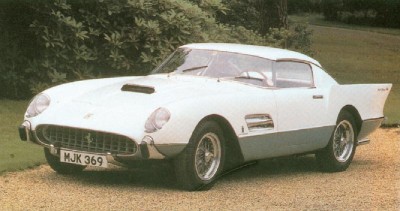 The Ferrari 410 Superfast was first seen on the Pinin Farina stand at the 1956 Paris Auto Show.

Ferrari introduced changes to the 1956 Ferrari during the fall of 1955 when it exhibited a new chassis at the Paris Auto Salon in September.

At first glance, it looked much like previous Ferrari efforts, with a large oval-section tubular frame and round-section X-member and cross-members, and independent front suspension with unequal-length A-arms and coil springs, which replaced the transverse leaf that Ferrari had used since 1947. The live rear axle was attached by two semi-elliptic springs, with a pair of parallel trailing arms on each side to absorb acceleration and braking torque.

A closer examination of the chassis, however, revealed that the frame went over the rear axle instead of under, as had been the practice previously. Also, the car was big, taking its 110.2-inch wheelbase from the 250 Europa and 375 America, both of which had just been phased out.

The engine was a new version of the familiar Lampredi V-12 design, developed for Ferrari's grand prix cars in 1951 and used in the sports racers through 1954. Typical of Lampredi's engines, the cylinder head and block on each bank were made as one piece and bolted to the crankcase, with screwed-in cylinder liners sealed at the bottom by O-rings.

The chain-driven single overhead camshaft on each bank operated a single inlet and exhaust valve for each cylinder via rocker arms and roller followers. The inclined valves were closed by two mousetrap springs per valve -- a feature that was common to both Colombo and Lampredi engines at the time. One spark plug per cylinder was fed from a Marelli distributor mounted vertically at the rear of each camshaft, although some later Superamericas had front-mounted distributors.

Based on the 410 Superamerica, the Ferrari 410 Superfast rode on the new, shorter chassis.

Because each cylinder bank had its own ignition system, the engine could be described as two sixes mounted on a single crankcase and sharing a common crankshaft. With a bore and stroke of 88 x 68 mm and a displacement of 4,963 cc, the engine cranked out 340 horsepower at 6,000 rpm, according to factory literature. The compression ratio was only 8.5:1, one of the lowest of all Ferraris.

Power went through a multiple-disc clutch and a four-speed transmission to the rear axle, with several ratios between 3.11:1 and 3.66:1 being offered. Top speed, again according to Ferrari literature, ranged from 137 to 161.5 miles per hour, depending on final gear ratio. Unfortunately, no contemporary road test figures were available to verify or refute the claims.

Assuming that the engine could pull up to redline in top gear, the car would have performed as claimed. The hefty gearboxes installed in the 410 Superamerica had the ability to absorb the tremendous torque, but the clutch was a marginal unit; great care had to be taken to ensure anything close to long clutch life.

The transmission had an unusual shift pattern, whereby reverse, third, and first were placed left to right across the top, and fourth and second were left and right across the bottom -- the H-pattern was a mirror-image of most four-speeds.