The 1956-1960 DeSoto Adventurer surprised critics. True story. Big-time automotive journalists in the late 1950s compare a flashy full-size coupe to Chrysler's mighty 300-D and find it holds its own against the premier performance car of the day. They act as if this is a revelation. Their account in the June 1958 edition of Motor Trend begins: "Sneak treat of '58 is DeSoto's Adventurer series, a gutty hardtop and convertible duo for the fellow who wants something different." Interestingly, the Adventurer was in its third model year. And previous versions had been even quicker.

Motor Trend's apparent surprise speaks volumes about the Adventurer, a highly capable car trapped, unsung and unappreciated, between the glamorous letter series Chryslers and the lean young guns from Dodge and Plymouth. For although the Adventurer was among the fastest and best balanced big cars of the '50s, it also was a DeSoto.

Here was an automobile that could top 140 mph, but wasn't mentioned in DeSoto's sales literature until 1959, the fourth and final year of "true" Adventurer production. The 1957 version was the first American car whose standard engine made one horsepower per cubic inch of displacement, but DeSoto let Chevrolet claim glory for reaching that magic threshold.

Still, to the few who recognized its abilities, the Adventurer was sweeter for being a DeSoto. It was as if the family wallflower had suddenly revealed a hidden talent. Indeed, DeSoto was the most conservative division in the staid Chrysler clan. It considered one hundred thousand units a great year, never climbed above tenth place in the sales race, and couldn't capitalize on what excitement did come its way.

DeSoto's first V-8, for example, was a hemispherical combustion-chamber 276-cid mill with 160 bhp, more power per cubic inch than any six- or eight-cylinder engine on the market. But few cared: The 1952 DeSotos in which it debuted were lackluster variations of the boxy 1949 models.

It wasn't until Chrysler Corporation's "Forward Look" reskin of 1955, and the addition of modest tailfins for '56, that DeSoto seemed to have a pulse, The division had adopted Chrysler's 126-inch wheelbase for '55 and dropped its prewar facial motif in favor of a modern mesh grille for '56. DeSoto's hemi V-8 grew to 330 cid, good for 230 bhp in the base Firedome model and a healthy 255 in the upscale Fireflite.

The promotional highlight of one year -- maybe of its existence -- was the announcement that a Fireflite convertible would pace the '56 Indianapolis 500. It was the division's first and only Indy pace car, and it celebrated by building about 400 production replicas, dubbed Pacesetters. Done in white with a gold top, side sweep, and trim, the replicas were unveiled on January 11. They used the 255-bhp hemi, and were adequate performers.

Real Mopar muscle at the moment was the domain of the letter-series Chryslers, which debuted in mid-1955 as the $4110 C-300. Powered by a 300-bhp 331-cid hemi, the 130-mph coupe won races, grabbed headlines, and demonstrated how a performance model could generate showroom traffic. It's unclear if the other divisions then badgered the corporation for permission to create "super stackers" of their own, or were ordered to come up with one. For its part, DeSoto had a tradition of releasing midyear luxury models.

In a recent interview, James L. Wichert, DeSoto's director of advertising and sales promotion from 1949 to 1961, said he wasn't privy to the thinking of his superiors, but suspects DeSoto was less anxious than youth-oriented Dodge and Plymouth to push the performance theme. 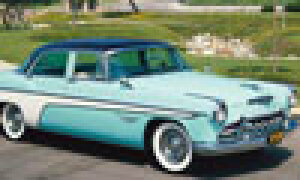