The Chevrolet El Morocco story begins with one Ruben Allender, a millionaire Detroit industrialist and car enthusiast. In late 1955, he reckoned that a market existed for a low-priced lookalike of the Cadillac Eldorado convertible he'd just purchased, a car at the top of most everyone's "dream" list.

Aware of the customizing craze then sweeping the nation, he decided to do what thousands were already doing: restyle a Chevrolet -- only he would build copies to special order.

It was a great idea, and Allender was singularly well-equipped to pursue it. Besides having lots of money, he just happened to own a big war-surplus warehouse on Van Dyke Avenue in Detroit, near Jefferson Avenue, filled with leftover hardware that could be used to create his automotive illusion. It could even serve as a shop for making it.

And he got a little unexpected help from General Motors, of all places, which made the 1956 Chevrolet look more like a Cadillac than the 1955 model he initially planned to use.

Allender needed a prototype design, so he went to Creative Industries, an independent Detroit specialty styling and fabrication house that had built the Ford Atmos and Packard Panther show cars under contract. The result was a handsomely customized 1956 Bel Air convertible that looked like a scaled-down Eldorado Biarritz.

He also needed a production engineer and a shop manager. Quite by accident, he found both in the person of 28-year-old Cyril Olbrich, who'd been experimenting with tools designed for that new wonder material, fiberglass.

Once the nearby Don McCullough agency agreed to supply factory-fresh Bel Airs at about $50 over dealer cost, the third floor of Allender's warehouse was cleared for converting everyday Chevys into imitation Caddys.

But Allender didn't stop there. Deciding that his cars should have their own name, he went looking for something that sounded a bit like "Eldorado" but not so much as to invite trouble from Cadillac. Ultimately he picked "El Morocco," and managed to pull a few strings to get it recognized by the law. Thus the Chevrolet El Morocco was born.

Continue to the next page to learn more about the 1956 Chevrolet El Morocco.

The 1956 Chevrolet El Morocco was a bit of a Frankenstein. Mechanically, it left Allender's shop just the way Chevy had built it. The styling, of course, was something else: engineered by Olbrich and professionally crafted, but as much a "junkyard jumble" as any 1950s custom.

According to Olbrich, many of the pieces came straight from Allender's warehouse. The prominent "Dagmar" front bumper guards, for example, were actually 1937 Dodge truck headlamp shells reinforced with fiberglass.

A modified Kaiser-Frazer horn button became a substitute hood medallion, the "saddle" door top trim was made from 1955 Willys dashboard pieces, and 1955 Ford body moldings were used atop the fins.

The stock Chevy hood ornament was shorn of its wings and given little Plexiglas fins to mimic the Cadillac mascot, Olbrich castings faithfully followed 1955-1956 Eldorado side trim, and aftermarket wheel covers were chosen to ape Caddy's "Sabre-Spoke" wheels.

The major changes naturally showed up at the rear. A portion of the Chevy fenders was cut away and Eldo-style fiberglass fins were bolted on, then finished with epoxy resin to create a smooth seam that would be invisible when painted. Completing the illusion were 1955 Dodge taillamps mounted horizontally above dummy exhaust ports.

The 1956 El Morocco made quite a splash in the automotive press. As one Motor Trend writer, Don MacDonald, predicted in the magazine's September 1956 issue:

"There should be ready acceptance. The public is already brainwashed into the belief that Cadillac's, and particularly Eldorado's, fins represent the epitome of motordom. Unfortunately, many believers can't afford the real thing; Eldorado sales do not reflect their true popularity. We can't help but agree with Allender that a Chevrolet-based miniature at $3,250 complete . . . should be a hot seller."

But it wasn't. Though Allender had envisioned building up to 10 a day, only 20 of the 1956s were completed: two hardtop coupes and 18 convertibles. Most were fitted with a continental kit in true 1950s style, which brought the advertised retail price up to around $3,400.

And that, of course, was the problem. While the Chevrolet El Morocco cost only half as much as an Eldorado, it was expensive for Chevy, about $1,000 more than the stock 1956, which was a lot of money in those days. Moreover, many of those who could afford the ersatz Cadillac styling could just as easily buy the real thing.

Allender's makeshift production facilities didn't help: Working conditions were so crude that he had to run an extension cord up from the first floor -- on the outside of the building -- to get power to the shop. This was a bad omen.

Keep reading to find out about the 1957 Chevrolet El Morocco. 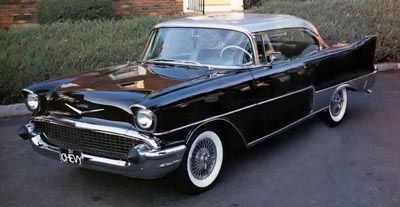 Demise of the Chevrolet El Morocco

It was still patterned on the Eldorado Biarritz convertible and Seville hardtop coupe with their "shark" fins and single headlights, versus the Brougham's stepped fins and quad lamps (one of the first U.S. cars so equipped).

Nevertheless, the 1957 Chevrolet El Morocco did look much like Caddy's new $13,000 flagship from behind, with similarly styled fins and bumper. Also similar were the L-shaped bodyside moldings (Biarritz/Seville flanks were mostly chromeless), curved down to form dummy air scoops ahead of broad appliqués on the lower rear fenders.

As you might expect, the transformation was most effective on the four-door hardtop. Still, there was never any thought of duplicating the Brougham's brushed stainless-steel roof, which would have shot the retail price sky-high and defeated Allender's whole purpose.

As was recounted in Motor Trend that July, the 1957 conversion began when the stock car "is stripped of all trim, the hood and deck are removed, and the trim mounting holes are filled in. Then the hood is completely smoothed out with extra sheet steel, welded in place . . . The fender fins are [also]

"The only original trim that remains when the El Morocco is finished is the chrome fin tip and the headlight bezels. All other trim is special (and expensive) cast or shaped aluminum or steel. All trim items are chromed. Front bumpers are slightly reworked and the turn signal lights are new [the originals were covered with black "tip" bumper guards that extended overall length by about five inches over stock].

"The Eldorado-like latticework grille is aluminum. The generous chrome rear-quarter side panels are dimpled sheet brass, which is chromed. Similar material is used in back at each side of the license plate recess. The two small lights in each rear chrome panel are dummies."

Though quad headlamps were rumored, all the 1957 Chevrolet El Moroccos had the stock dual lights. As a finishing touch, the Chevrolet script above the gold V's on hood and rear deck was replaced by "El Morocco" in neat block letters.

Interior was stock except for the engraved dash and wheel hub plaques.
©2007 Publications International, Ltd.

As before, there were no mechanical or structural changes. All the 1957s were apparently equipped with the four-barrel version of Chevy's new 283 V-8, plus Powerglide automatic, radio, and heater. However, buyers could choose from turbine-type or triple-spoke "spinner" wheel covers.

One final, fascinating distinction was a leather pad on the steering wheel hub. Deeply stamped into it were the words "El Morocco Custom Built For . . . ," with the owner's name added later, of course.

Remarkably, the price difference between Chevy and El Morocco was much lower in 1957 than the previous year. The hardtops retailed at $2,750-$2,800, about $500 above the stock Two-Tens, while the convertible cost $2,950, less than $500 more than the equivalent Bel Air.

But by then, it was too late. Though Allender had hoped to sell El Morocco through selected Chevy dealers, the plan fizzled, perhaps due to lack of official GM backing. Moreover, his warehouse facilities offered no hope of increasing production to a profitable level, and demand for medium-price cars was on the wane anyway.

Fortunately, a few of his cars still survive -- and still prompt double-takes. They're perhaps the rarest and most distinctive artifacts of the "Classic Chevy" years. They're also a reminder that success in the auto business -- then and now -- takes a lot more than just a great idea.