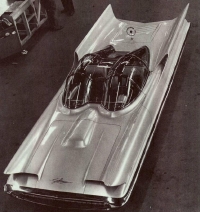 Futura made the rounds of the auto shows in 1955 and for several years thereafter.

Ghia's turnaround time in building the 1955 Lincoln Futura concept car was very quick. It only took two or three months to complete the Futura, and in January 1955, the finished product was unveiled at the 1955 Chicago auto show, which ran January 8-16. From there it went on to the Detroit show, which opened in late January.

The next showing of the Futura was slated for the New York auto show. On March 3, just before the show opened, Benson Ford and chief designer Bill Schmidt foreshadowed the car's future when they took it for a drive on the streets of Gotham from the United Nations Building to Central Park. It generated great publicity, and photographs and film of the event show a stunning contrast between the Futura and the other cars on the street.

If the purpose of driving the Futura in crowded New York City traffic was to show the public the Ford in their future, it was a success. The public was not told, however, that in this sojourn the air-conditioning and ventilation systems failed, turning the Plexiglas-covered passenger compartment into a sauna.

For a portion of their drive through New York, Ford and Schmidt were able to override the safety relays that prevented the roof section and the doors from opening when the car was moving. Most of the time, especially when the press was around, the roof and doors were closed, even though the Futura's two passengers were sweating profusely. In the pictures, at least, Ford and Schmidt looked like they were having the time of their lives.

The Futura continued on a very busy schedule after the 1955 show circuit, appearing at auto events, fairs, races, and selected dealer showrooms for the next several years. When not on tour, it was usually displayed at the Ford Rotunda.

By 1959, however, the four-year-old Futura was considered to be a little long in the tooth. Ford Motor Company was also in the middle of the Edsel fiasco. Budgets for concept cars all but dried up at Ford, and product planners were beginning to play a bigger role in gauging public opinion. It was then that Lincoln's stage ingenue headed for the bright lights of Hollywood.

Enter one George Barris, perhaps the most famous member of Southern California's "kustom kar" kulture -- uh, culture. Barris claims that it was at his urging that the Futura came to Hollywood. Nonetheless, in 1959 the Futura wound up in the movie It Started With a Kiss, starring Debbie Reynolds and Glenn Ford. (The Futura was cast as a one-off concept car won by a U.S. Air Force non-corn serving in Europe. The film shows the engine compartment.

When the car was screen tested for the film, its iridescent blue-white paint came out looking flat. The only system then available that could have recorded the nature of the Futura's paint with some degree of accuracy was 3-D, which was never seriously considered. Needless to say, MGM elected to have the Futura repainted a color that filmed better; it was repainted red -- at Barris Kustom City.

After the movie, the Futura sat for a time in the studio lot, and then in the yard next to Barris' shop until about 1965. During that time, the tires went flat, the paint faded, one or two of the wheel covers were lost, and the car generally deteriorated.

To find more information about how Barris acquired the car, continue reading on the next page.