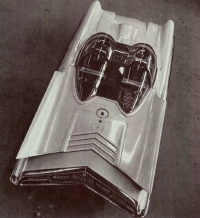 A microphone on the rear deck allowed passengers to hear sounds outside the car.

The early Fifties were heady times at Ford Motor Company, when the 1955 Lincoln Futura concept was built.

From Henry Ford II on down the line, those at Ford thought they could overtake GM as the industry leader. By 1952, Ford was not only planning to match GM model for model, it also hoped to surpass the General in total vehicle sales by the end of the decade.

In that climate, Ford executives saw the Futura as an exceptional design that would be a functional, fully operational laboratory on wheels and also get them a lot of good press. The Futura represented the very direction in which Ford executives thought they wanted to go. So on the Futura, unlike most other concept cars, everything but the windshield wipers worked -- and there were no windshield wipers.

In addition to knockout good looks, the Futura had some unusual and innovative features:

For more cool Futura features, continue reading on the next page.