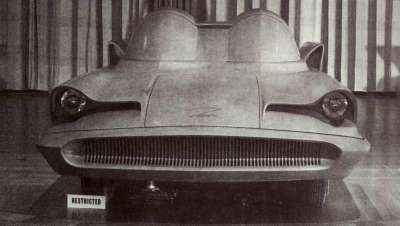 The full-size clay form of the Futura emerged with a broad, low grille of fine concave vertical bars.

In the process of designing the car, the 1955 Lincoln Futura models included a 3/8-size clay, a full-size clay and at least one partial clay model of the interior. By late 1954, a full-size plaster model of the Futura, a complete set of plans and blueprints, a chassis, and running gear were sent to Ghia in Turin, Italy, to be used for construction of a fully operational Futura.

At $250,000 for the finished product, Ghia's bid undercut all comers for the contract, but Ford Motor Company got a lot for its money. Ghia craftsmen were famous for their workmanship (at the time, Ghia probably had the best panel beaters in the world) and they preferred to work in metal rather than fiberglass.

Because the Italian custom body builders had a reputation for being inclined to do things their own way once they got started on a project, Ford designer Don DeLaRossa, who was then working in England, was assigned responsibility for follow-up. He reportedly visited the Ghia factory several times to make sure there were no surprises. (The only major problem that developed during construction was with the design of the Futura's wheel openings, which had to be slightly modified.)

Bill Schmidt, Lincoln-Mercury chief designer, also went to Italy to check on the progress of the car. In those days, the Ghia facility had an open courtyard with trees in the middle. Some of the trees had died or been cut down, and Schmidt noticed that the stumps had odd shapes to them.

Ghia's old-time craftsmen, used to doing things the way they were taught, were using the stumps to shape the Futura's metal panels. The irony that part of a futuristic car was being hammered out on tree stumps wasn't lost on Schmidt.

There was no beating about the bush when it came to forming the car's Plexiglas canopy and the complicated interlock mechanism that operated it. That task was done in-house at Ford under Regitko's direction and sent to Ghia for installation on the Futura.

As for paint, Schmidt had his heart set on matching the iridescence of the fish he had seen on the Caribbean vacation that inspired the car, and he got it. Press releases and contemporary news accounts described the Futura's color as "pearlescent, frost-blue white." The finish presented each of the viewer's eyes with a slightly different color.

The conflict of color between both eyes causes what is known as retinal rivalry and leads the viewer to see the object in a third color. The colors are also affected by the light around them. This is why a color photograph of the Futura looks flat and cannot capture the iridescent shimmer. It also accounts for why no two eyewitnesses could agree on exactly what color the car was.

To get the iridescent effect Schmidt wanted, Ghia ground and pulverized the scales from thousands of fish to mix in with the paint. (Incidentally, Schmidt's first drawings of the Futura were of a black car with red upholstery and a blue car with gold upholstery.)

To learn what Ghia used under the skin of the car, continue reading on the next page.