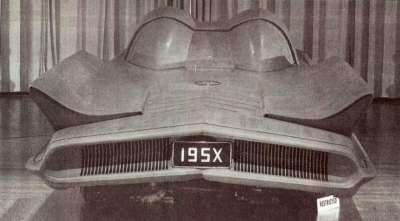 Prominent rear-deck "gills" were first seen on a clay model of the Futura.

Bill Schmidt, the mid-century Lincoln-Mercury chief stylist who died in 1990, acknowledged that a mako shark and a manta ray get some credit as the 1955 Lincoln Futura influences. But that is only part of the story.

The "gills" on the decklid of the finished Futura concept are the most predominant features that look like they were copied from the anatomy of a shark. Interestingly enough, the original drawings of the car done by Schmidt in 1952 have no gills or other features (except possibly the hooded headlights) that are attributable to any sea creature. The gills first appeared on the 3/8-scale clay model of the Futura that was completed in 1953. (Schmidt's first drawings of the Futura show a car with taillights much like those that appeared on the 1955 Lincoln and with rear-bumper exhaust exits much like those on the 1956 Lincoln.)

Schmidt, who usually spent his spare time sketching, had drawn three or four renderings showing his ideas for a "Futura" concept car. At that time, 10 percent of the Design Center budget was available for discretionary projects. General approval was obtained and the Futura became one of those discretionary projects. Engineering also had money in its budget for experimentation, some of which was earmarked for the program.

Because the Futura was to be a full-size concept car, it was necessary to have an agreement between styling and engineering that what the stylists wanted to build could actually be carried out. The team that Schmidt assembled to work on the vehicle included John Najjar, who was in charge of body development all the way through to the finished full-size plaster model, and Martin Regitko, who was in charge of engineering. (They were acquainted from having worked together under Bob Gregorie on the original Continental project in 1938-39.)

All staff designers who worked on the Futura contributed to the final design of the car, but if a consensus could not be reached on some aspect of the design, Bill Schmidt made the final decision.

Regardless of what Ford news releases said, the predominant influence on the design of the Futura was the same one that was the rage for all car design during the 20 years following World War II -- modern jet aircraft. The twin-canopy passenger compartment, the front and rear fins, the grille, the air intakes at the front of the rear fins, the rear-end treatment, the interior, and the ventilation system were all inspired by the ever more sophisticated and faster jet fighters developed for the American military.

Since other automobile manufacturers were also drawing inspiration from jet fighters, it may well be that Ford, by publicly emphasizing the influence of a shark in the design of the Futura, was trying to differentiate its show special from those being turned out at GM and Chrysler.

Another influence on the design of the Futura was the social climate in the United States during the early Fifties. The U.S. was the world's leader, and the sky was literally the limit for what Americans believed they could do and produce. The Futura's very name brazenly and unapologetically looked forward to the limitless future most Americans saw spreading out before them.

The years during which the Futura was conceived and built were marked by faster and more powerful automobiles with lots of chrome and bright colors. Each car make was distinct from the rest of the pack.

The Futura outdid them all, and therein lies its appeal. From the perspective of 40 years later, some of the finned excesses of the Fifties and early Sixties -- even to people who liked them at the time -- are now an embarrassment. In contrast, the fins on the Futura are in perfect harmony with the rest of the car.

To find out more about the Futura design process, continue reading on the next page.