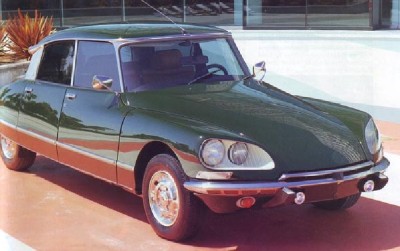 Changes for the 1965-1975 Citroen DS and ID were ongoing -- a necessity in order for the models to compete in the highly competitive automobile market.

The Goddess remained her idiosyncratic self for a decade before seeing significant changes. The first occurred in October 1965, when the old long-stroke engines were swept away in favor of more potent new short-stroke designs with sturdy five-main-bearing crank-shafts.

Appearing at the Paris Salon in early 1967 were facelifted models bearing a reshaped nose with four glass-covered headlamps (still circular), which steered with the front wheels on upmarket versions. Alas, U.S. regulations prohibited both the covers and the swiveling feature, so all models for that market wore fixed, unadorned sealed-beam lamps.

By 1969, the ID20 had spawned D Special and nicer D Super replacements, and fuel injection was optionally available on the DS21, which could be had in super-deluxe Pallas form. (Earlier trim levels were variously called Luxe, Confort, Super, Aero Super, and Grand Route.)

The following year brought a five-speed gearbox (developed with an eye to the forthcoming Maserati V-6-powered SM coupe), as well as a three-speed automatic transmission option (called "Citromatic" in the U.S.), which was not easy to package on this front-drive car.

Along the way, the dashboard lost its original oh-so 1950s look for a more modern -- if still unorthodox -- arrangement dominated by three round dials. The final development arrived in 1972 as the DS23, with an even bigger-bore engine of 2,347 cc and 115 horsepower in basic carbureted form.

So at last, the Goddess was as fast as she had always looked, but unfortunately the DS23 was not imported into the U.S. With impending emissions and safety regulations -- particularly the 5-mph crash bumpers required for 1973 -- Citroen withdrew the D-Series from the U.S. market after 1972.

In any case, the D-Series was long past its prime after nearly two decades, so it stepped aside in 1975 for the CX -- even smoother and faster, and even more complicated.

Still, it was a worthy successor to the D and lived nearly as long (all the way through 1989 and the debut of the current XM). Yet, it's the Goddess that most people still regard as the definitive big Citroen (along with the Traction). In their eyes, it remains a car whose genius will never be matched.