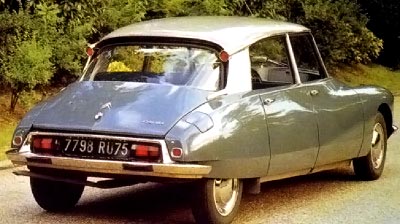 The 1965 Citroen DS21 featured taillights in the bumper and high-mounted lights and reflectors that rode outboard of the upper part of the bumper.
©2007 Publications International, Ltd.

Appearance was a triumph of practical function, though as with other features of the 1955-1975 D-Series, opinions were sharply divided about it. Yet at a time when most cars, American and European, were still looking rather dumpy, with craggy profiles and lots of fussy details, the DS19 was a miracle of smooth, sweeping lines.

Do note that the shape, with its severe rearward taper when seen from above (the rear track was nearly eight inches narrower than the front), was owed to Citroen's own Faliminio Bertoni; contrary to most published reports over the years, there was absolutely no involvement by the famous Bertone coachworks of Italy.

At 123 inches, the D-Series wheelbase was very long by European standards, and in fact it was the same as the 1955 Lincoln (though overall length was 26.6 inches shorter due to far less overhang).

This allowed Citroen to achieve both a spacious five-seater cabin and excellent aerodynamics. The DS had what was dubbed a "shark-nose," with an engine air intake tucked beneath the bumper and just a narrow slit above the bumper.

Throughout its life, the big Citroen was virtually bereft of decoration on its smooth flanks, and the short tail -- which nonetheless allowed for a 17.5 cubic-foot trunk -- was as carefully profiled as the nose. We won't get into drag coefficients, which mean different things to different people, but the D-Series was a better wind-cheater than any car in the world when it appeared, and was still among the very best when discontinued in 1975.

There was innovation under the skin, too, for this was the first car to use what is now known as "base unit" construction. Also known as a "birdcage" or "space frame," this involved a monococque skeleton onto which all body panels were bolted. This meant that a D could be driven in its "naked" state, completely functional save for a lack of lights.

Though more expensive than welded-on panels, the skeletal construction made the car easier to build and somewhat simpler to repair. Rover's mostly aluminum-paneled P6 used something similar in the 1960s and 1970s, as did Pontiac's plastic-skinned, two-seat Fiero of the 1980s.

A concern for safety was also evident, as Citroen pointed out by touting the early D-Series as "the safest car in the world." As an example, the D's unique single steering-wheel spoke was actually the top of the steering column, bent in such a way as to minimize chest injury in a crash.

With the under-bumper air intake, the spare tire could live ahead of the radiator without blocking engine air-flow, thus serving as a kind of "safety bumper" years before the U.S. government thought of such things.

This silver DS21 marked the September 1964 arrival of the new DS Pallas, which was notable for its luxury fittings.
©2007 Publications International, Ltd.

Other body innovations included frameless side glass, a removable rear window, and a tall wraparound windshield for exceptional visibility. And there were even embryonic "child safety" door locks -- little tabs that prevented opening any door from inside or outside, even with the key.