While road testers praised the 190SL, Mercedes- Benz tried to develop a model with more power.

In his report, Nallinger said of the 190SL with the M180 fuel-injected engine (in effect the W127): "This car performs beautifully with all vibrations and resonance inside gone. The vehicle has a cultivated appearance, strong acceleration, and drives very comfortably. It will surely be favored by our customers.

"The body stiffness is slightly reduced but we will soon find a constructive solution for the installation." From September 1956, Nallinger had penned the 220SL, as it had by now been referred to internally, into the range. He had even planned to show it at the Frankfurt auto show in 1957. At the time there were discussions about producing the 220SL only, or perhaps offering the 220SL as an in-between model between the modestly powered 190SL and the high-powered 300SL.

At the board meeting of April 12, 1957, it was concluded to build both the 190SL and the 220SL. However, a production problem reared its head. Hans Moll, works chief at Untertürkheim, advised Nallinger that the new tooling for production of fuel-injected six-cylinder engines would not be ready for their release timetable.

Meanwhile, testing continued. Goschel achieved 130 bhp with the touring camshaft, while Waxenberger racked up the test miles in cars four and five. His only negative comment concerned the car's tendency to over-steer when cornering at high speed. He noted wryly that by carrying an 80kg (176-pound) weight in the trunk, the car became far more balanced and handled in a similar manner to the 300SL roadster!

In view of the difficulties, the W127 program was continued, but with reduced urgency because sales of the 190SL were still strong worldwide. Concurrent with these activities, Nallinger was also overseeing the design and development of the new S-class cars (Will and W112) that would introduce new body manufacturing technology.

At board level, he questioned whether production difficulties might arise with the mixing of the new monocoque Will body and old W127; he believed that there was a contradiction with the old on the one side and the totally new aggregates on the other.

As production of the W127 could not begin before 1960, Nallinger instead proposed to develop a completely new 220SL using the technology developed for the Will. This led to the development of the W113 that became known as the 230SL and featured designer Bela Barenyi's famous "pagoda" roof.

The W127 became important, after all, in the story of the SL cars from Mercedes-Benz because it was the link between the past, represented by the 190SL, and the future, the 230SL. 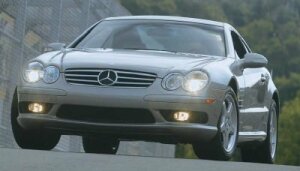