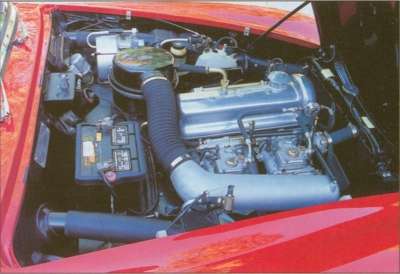 Mechanically, the 1955 Mercedes-Benz 190SL was very advanced for the year of its introduction on the world market. Like the W180- and W186-series six-cylinder sedans, the 190SL's four-cylinder engine would feature a single, chain-driven overhead camshaft operating staggered valves via pivoted long-and-short rocker arms. Designated M121, it shared nothing with its sedan counterpart's aged side-valve engine.

The M121 engine was the first of a new four-cylinder engine family developed by the team led by Hans Scherenberg. Karl-Heinz Goschel is generally recognized as the key engineer in the development program.

Although the M121's cylinder-block material was cast iron and not aluminum alloy, as in the 300SL, the two did have 85mm cylinder bores in common. The stroke of the four-cylinder's forged three-bearing crankshaft was 83.6mm, giving a capacity of 1897cc. (Why the 88mm stroke of the six's crank was not retained to give a full 2.0-liter capacity has never been revealed.)

Standing upright in the engine bay -- there wasn't room to lay it over as in the 300SL -- the under-hood view was highlighted by the cast aluminum plenum that channeled air from the circular air cleaner mounted on the bulkhead to the carbs. Tucked away under the carburetors was a four-into-one fabricated exhaust manifold; despite the overhead camshaft, the M121 engine's sophistication did not run to a cross-flow cylinder head.

The four-speed all-synchromesh gearbox was modified to accept a remote floor gearshift linkage. First prototypes were seen with a long, cranked lever that originated from well under the dash, but by production, this had given way to a neat central floor lever.

Suspension was, in the Mercedes-Benz tradition, independent all around. At the front were classic upper and lower wishbones with coil springs, while at the rear was D-B's famous single-pivot swing-axle. Coil springs were mounted on long trailing arms with rubber bushings to minimize noise transfer.

Mounted horizontally above the differential was another coil spring that Mercedes referred to as a "compensating" spring designed to reduce camber variations during wheel movement. This low pivot-point system evolved out of Mercedes's 300SL racing program. The same system would appear on the 220 series sedans and, later, on the 190 sedans.

Braking also had a competition heritage. All four wheels carried finned aluminum nine-inch drums with steel liners. The front drums had twin-leading shoes, with leading-and-trailing shoes at the rear. An ATE Hydrovac booster was an option when production began, but from mid-1956 onward, it was fitted as standard.

As on the new 220 sedans, the 190SL had a completely new self-supporting frame-floor system. It comprised a deep central tunnel, to accommodate the tail-shaft, flanked by rigid, welded box-section sills with a ribbed, pressed steel floor panel. The body panels were welded to this assembly.

Bolted to the front of this rigid frame was a demountable engine subframe. It attached at three points, all rubber insulated, and enabled the front suspension, steering, engine, and gearbox to be mounted as a unit on the assembly line, as well as facilitating simpler maintenance when the time came.

To learn how these features translated where it really counts -- on the road -- see the next page.