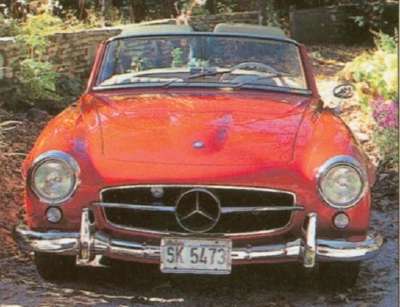 The basic shape of the 1955 Mercedes-Benz 190SL design was arrived at almost immediately. It featured headlights mounted at the leading edge of the front fenders, small strakes over the front wheel arch, a graceful curve up and over the rear fender to a sloping rear trunk, and, of course, the "open mouth" front air intake with the floating three-pointed star within.

It was a prototype 190SL that was displayed at the 1954 New York Motor Show to gauge buyer interest. The reaction was positive and development, particularly of the body style, continued.

For its second premiere at the Geneva Salon in March 1955, many styling touches from the prototype were modified in preparation for series production. Detail changes included:

Inside, the dash was altered, too. The prototype's instrument binnacle was flat, shallow, and wide, with the minor gauges positioned between the speedometer and tachometer. For production, the binnacle projected slightly, was much taller and narrower, and the ancillary gauges relocated in a line below the two major dials.

The tall binnacle in the dash lent prominence to the tachometer and speedometer dials in the 190SL.

The dash top was extensively padded to reduce sun glare and increase occupant safety. (An early press photograph even showed the 190SL with a column gearshift lever.) A neat touch, and perhaps an indication of how Mercedes-Benz marketing folks really saw the 190SL, was the provision of two sets of heater controls -- one for the driver and another for the passenger. This required two heater matrixes under the hood and two sets of air trunks.