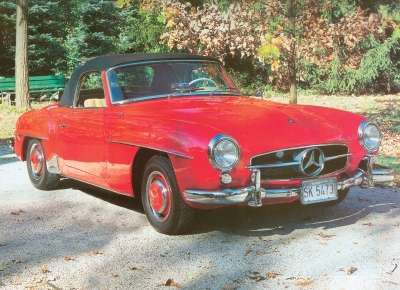 The development of the 1955 Mercedes-Benz 190SL came about as a way to give everyday consumers a version of the powerful Mercedes-Benz 300SL. Unfortunately, in the opinion of many connoisseurs, it is not as well-regarded as its handsome and athletic older brother, and is not regarded as a real collectible.

The general consensus is that the 190SL is underpowered and lacks performance. If it is compared with its stable-mate, the 300SL, or the 507, then the criticism is valid. The 356 had less power, but it was much lighter and far more nimble.

Perhaps the fault lies with Mercedes-Benz itself and its approach at the time of the little 190SL's introduction. In its styling and general concept, it was regarded as a sports car by the press and the public alike, but the company quietly promoted it as a sports tourer. There was not a lot of conviction in the tourer stance though, and at the car's introduction, the manufacturer talked quite openly of a version specifically for the race track.

After the destruction of its Stuttgart factories during World War II, Daimler-Benz began its postwar reconstruction with limited production of the Mercedes Type 170 series sedan, complete with styling and a side-valve 1.7-liter four-cylinder engine that were strictly prewar. At the same time, postwar Germany desperately needed trucks and Daimler-Benz obliged.

The profits from these operations were plowed back into building new facilities, and in designing and developing important new models. While the prewar 170 was upgraded between 1946 and 1951, running in parallel was the development of a completely new range of luxury six-cylinder sedans and coupes. These appeared in 1951 as the 220 and 300, the engines of both models featuring a single chain-driven overhead camshaft.

An optional top turned the two-seat Mercedes-Benz 190SL convertible into a "coupe."

With a successful prewar history on the racetracks of Europe with the all-conquering Silver Arrows, many Daimler-Benz engineers, particularly Rudolf Uhlenhaut, pushed for the company to re-enter motorsports. Formula 1 was out of the question -- the resources simply weren't available -- but developing a sports racing car using as many production components as possible from the new 300 series appealed to management.

Out of these discussions came the brilliant, but complex, 300SL. It was immediately successful, taking a fine second place to Ferrari in the 1952 Mille Miglia, victory in Bern, Switzerland, two weeks later, followed by outright victory at the grueling 24 hours at Le Mans.

To read about the introduction of the 190SL, continue on to the next page.