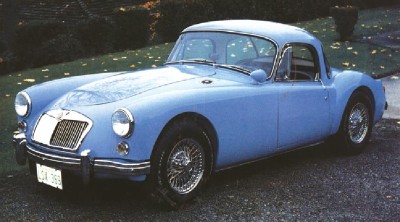 Initially, output of the 1600 overlapped that of the Twin Cam. Interestingly enough, the new model's powerplant was a pushrod version of the 1588cc engine but borrowed compression ratio, carburetion, and valve timing from the 1500.

The larger 75.414 mm bore, though, boosted horsepower to 80 at 5,600 rpm. Lockheed disc brakes became standard up front, and the transmission and propeller shaft benefited from Twin Cam development.

The 1960 MGA 1600 coupe continued as an alternative to the roadster.

The 1600 also received some minor design changes that make it easy to distinguish from the 1500. Sliding side curtains, which had already been available on the Twin Cam, replaced the flaps on the 1500.

The front end received larger, flatter parking light lenses and the taillight assemblies were modified to accept a second lens. The lighting changes came in response to U.S. regulations that required amber front turn signals and separate signals in the rear. Badges for the 1600 were placed behind the cowl vents and on the trunk lid.

The MGA 1600 continued the basic MG formula, that of a nimble, fun-to-drive, inexpensive sports car. Front disc brakes made it stop quicker, and 10 percent more power made it even more responsive.

Unlike the Twin Cam, the MGA 1600 -- whose top speed moved up to an honest 100 mph -- required only normal maintenance. Its two-year production span lasted through April 1961, with 31,501 units built, lifting total MGA production to 92,361 in less than six years, far ahead of Austin-Healey.

When the MGA 1600 Mark II debuted in June of 1961, The Faithful were immediately impressed, for here was a 105-mph machine that could accelerate from 0-60 mph in 13.7 seconds. Bolt-on disc wheels were recommended in lieu of the still optional wires because of their greater strength. The 1622cc engine, with 8.9:1 compression, developed 93 horsepower at 5,500 rpm.

The interior of the MGA 1600 was largely unchanged.

The Mark I's braking system was continued, but a higher 4.10:1 final drive ratio marked the first such change since the MGA 1500. Oil coolers were standardized on all Mark IIs exported to America to better accommodate higher sustained cruising speeds and the North American climate.

The Mark II also received two easily overlooked styling changes. The first involved moving the vertical grille bars back about 2.5 inches at the bottom. The second, done mainly to meet rear lighting regulations of various countries, resulted in the installation of Austin Mini taillights mounted horizontally. Also, the dash and scuttle were covered in Nuvon plastic, which reduced reflections, and seat belt anchors were provided (but not seat belts).

By now, the auto enthusiast press occasionally complained about the MG's "old-fashioned" side screens and choppy ride and wished for still more acceleration. Nonetheless, the 1600 Mark II was well respected worldwide; Road & Track, for instance, paid it the ultimate compliment: "In our opinion, this is truly the 'universal' sports car."