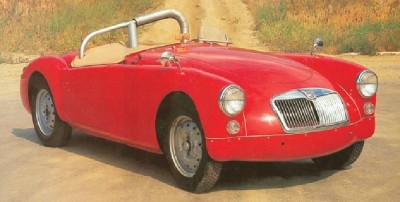 With only a few modifications, MGAs could be pressed into service in Class F racing events.

Road & Track was quick to wring out the 1955 MGA performance and to compare it with the TF 1500 in its October 1955 issue. R&T staffers found the new model superior in almost every respect.

Top speed jumped to 95 mph from 85, almost totally due to the reduced air resistance of the new body -- only 94 pounds of total drag at 60 mph for the MGA compared to 119 pounds for the TF, a 21 percent improvement. R&T also obtained significantly improved fuel economy with the MGA: 30 mpg at a 65/75 mph cruise, compared to 25 mpg.

Despite the MGA's many admirable positive virtues, objections were sometimes heard (and loudly) from hard-core MG traditionalists. They mourned the passing of the square-rigged, high-radiatored classic lines, and the equally high clamshell-shaped fenders. Such noises would be heard again when the even-more-modern MGB replaced the MGA in 1962.

At the New York City MGA introduction, one zealot was heard to observe that, "The bloody thing can be mistaken for a Siata or almost anything -- except a Morgan."

"Maybe so," an American-accented chap wearing an SCCA (Sports Car Club of America) button on his lapel retorted, "but a pair of prototypes did right well at Le Mans last June."

The topper was another observation from a gentleman who looked like a dignified attorney: "I own a Packard Caribbean and I'll warrant that this MGA is a helluva lot more fun to drive."

For racing events, the bumpers of the MGA were often shed to take off extra pounds.

The fuel tank was concealed for the first time on an MG sports car. And if one wanted to go on an extended trip, an early factory option was an efficient luggage rack that attached easily to the rear deck lid.

Other options included knock-off wire wheels in place of steel discs, 4.55:1 rear axle, telescoping steering column, and tonneau cover. And early in the production run, tough main bearings and what Abingdon called "tuning" increased the rated output from 68 to 72 horsepower at 5,750 rpm.

All told, there were few alternatives to the MGA: a competition-worthy Class F production sports car that could deliver a maximum of 95-plus miles per hour for only $2,450 to $2,550 ready for the road.