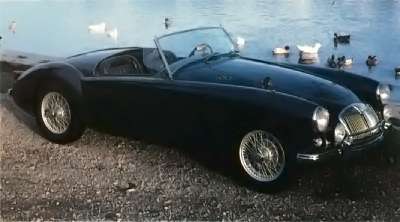 The fair success in the 1955 Le Mans, and the more than five month drought of MG sports cars, assured large turnouts wherever the new, beautifully streamlined 1955 MGA 1500 was displayed.

Looking nearly identical to the Le Mans trio, the fully enveloped two-seater used a rigid, box-section frame that measured 45.5 inches wide at the cockpit, permitting low seating with buckets nestled between the frame rails and the transmission hump. The happy result, of course, was a sleek profile.

The 1489cc ohv engine, the well-proven BMC B-type inline four, utilized the same 8.3:1 compression ratio as the MG Magnette ZB saloon, which debuted one month after the 1955 MGA. Fitted for the MGA with dual 1.5-inch SU semi-downdraft carburetors, it developed 68 horsepower at 5,500 rpm, eight more than the Magnette.

The gearbox, too, was shared with the sedan, including the four internal ratios, but the 4.3:1 final drive ratio differed. The rear suspension and brake system were also common to both cars.

The independent coil spring front suspension came straight from the TF, as did the rack-and-pinion steering. The latter, with only 2.75 turns lock-to-lock, was noted for quick and easy response. Genuine instruments -- no faddish blinking "idiot lights" here -- were well placed with a large speedometer and tachometer directly in front of the driver.

Legroom was abundant, and the well-positioned pedals provided more foot room around them than in the TF, although some felt the need for still more room. Once inside, the cockpit felt somewhat more spacious than most small sports cars of the era, but the 1955 MGA was a bit more difficult to enter than the TF due to its lowness and the configuration of the cowl.

The area behind the buckets accommodated a briefcase and small items, but luggage had to compete for space in the boot with the spare tire and wheel, tools, and the little odds and ends that every true sports car aficionado always carried.

The spare tire nearly filled the trunk of the MGA, so many owners installed a luggage rack on the trunk.

Though more comfortable and somewhat roomier (in answer to dealer requests, mostly from America), the 1955 MGA remained very much a sports car. An easily erected hood and side curtains secured the interior from all but the most violent storms, while a spring-loaded flap on the lower portion of each side curtain allowed one's hand to be extended for rally signaling or to pay tolls.

It also served to allow access from the outside to the horizontal pull cord beneath the inner door sill, necessary since there were no external door handles. This arrangement made it impossible to lock the cockpit of the MGA. And since the truck lid had to be unlatched from inside the car, neither the cockpit nor the trunk were safe from vandals. An interior grab handle made it easier for passengers to disembark.

By introduction time on the East Coast, the British magazine The Autocar had already assured The Faithful that a true 90+ miles per hour was on tap; that 0-60 mph required but 15 seconds; that maximum speeds were 26, 44, and 70 mph in the lower gears; and that in good stock tune a sharp driver could achieve 98 mph with the top and side curtains fixed in place.

Top gear, however, yielded only 17 mph per 1,000 rpm, meaning that the engine was spinning at a lively 4,000 rpm at 68 mph. This suggested that overdrive would be a useful option, but unfortunately it was not offered. Nonetheless, cruising speeds in an MGA were pretty much what highway conditions and the law permitted.

For more on the performance of the 1955 MGA, see the next page.