Development of the 1955 MGA 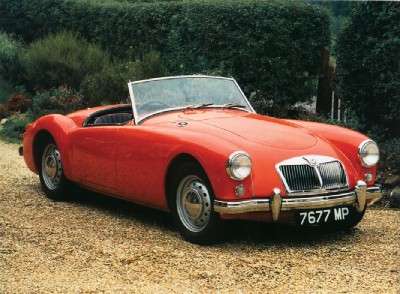 The MGA body was unchanged (except for details like the grille and lights) during the entire September 1955 to June 1962 production run.

Development of the 1955 MGA was not without challenges. Two copies of the chassis for the intended TD replacement were built, one fitted with a body similar to that of Phillips' 1951 Le Mans special. The seats sat low, positioned between the transmission and the chassis side rails.

Production feasibility was kept uppermost in mind, and so it was fitted with front and rear bumpers, folding windscreen, and a luggage boot containing tools and the spare wheel and tire. Only the TD suspension components and the rather tall T-series engine looked familiar, the latter requiring a clearance bulge on the bonnet. Following the MG nomenclature pattern, the new prototype became known as EX175.

By the time it was completed, Thornley already occupied the position of general manager at Abingdon. Although TD sales reports from all over the United States and the British Commonwealth were discouraging, the entire TD replacement project nonetheless ran into opposition from the new BMC Board of Directors, which had other ideas in mind.

Unknown to John Thornley and other MG loyalists, the board had already signed a contract with Donald Healey to oversee production of his latest design, the Austin-Healey. It was to be powered by an existing Austin engine, the 2.6-liter four from the Austin A90.

Thus, while the Austin-Healey 100 two-seat sports car took the spotlight at the 1952 London Motor Show, a disappointed MG management and staff had to make do with the all-too-familiar TD Midget at its own stand.

It mattered not a whit to the largely Austin-controlled BMC board that the Abingdon product had consistently outsold all other sports cars in the free world; the Austin-Healey 100 had been chosen to wear the BMC sports car crown. To develop two new sports cars simultaneously, even if one was the best-selling MG, was simply too expensive.

Thus, the rumor that there would be no new MG sports car for the foreseeable future proved to be true. One could even hear talk that there might not be any more MGs at all, but word finally filtered down from the board that MG would have to be content with a face-lift of the TD. The result was the TF Midget, a hurriedly prepared stopgap model (albeit a most attractive one) that would carry the MG banner from October 1953 to March 1955.

Much respected in both Abingdon and Cowley, Thornley made the most of what little influence he had with the board, and somehow managed to get permission to organize a competitions department. And by early 1955, plans were finally laid to introduce a new MG sports car based on the experience gained from the earlier EX experimentals.

Several prototypes were hurriedly built and a team of three cars was entered in the 1955 Le Mans, scheduled for June 11. A well-conceived plan called for the introduction of the new MG roadster to distributors and the automotive press a week or so before the race in order to maximize exposure and generate enthusiasm for the long-awaited new MG.

Then came trouble: Body production ran into unexpected problems, causing serious delays and leaving chassis to sit in the Abingdon works sans clothing. Frustrated by their inability to set an introduction date, Thornley and Enever were forced to focus publicity instead on the three Le Mans EX182 prototypes. The best they could hope for was that the TF replacement would be ready for full-scale production in time for an early autumn debut at the London Motor Show.

For more on the 1955 MGA prototypes, continue to the next page.