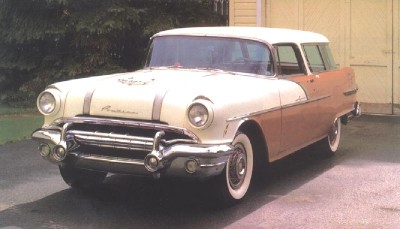 Meanwhile, for 1955 only, Nomad carried over features directly from the Corvette show car: chrome headlamp, front fender, and door trim, and full rear-wheel openings. For 1955 only, the Nomad was upholstered in a waffle/ribbed vinyl (like the 1956-1957 Corvette interiors), whereas upscale Safari seats in Star Chief Custom trim were covered in leather all three years, complementing the fancy vinyl headliner and chrome roof bows common to both for all three years.

For 1955, Pontiac Star Chief Safari's rear seat differed from Nomad's, being deeper and more comfortable. Its folding arrangement was unique in that the back folded down on the cushion and then the whole seat folded forward in the manner of jump seats in a limousine.

For 1956, Pontiac and Chevrolet did pretty much the same thing, though staying in line with each division's traditional role. That meant a face-lift a la Harley Earl's longer, lower, and wider dictate, plus refinements in 1955's all-new engineering to improve handling, power, and performance.

Not surprisingly, designers felt that the styling face-lifts, by their very application, detracted from the original and clean 1955 body. Happily, though, the tastefully unique show-car-inspired styling above the beltline carried over for both wagons through 1957.

Chevrolet also fielded a special 225-horsepower 265 with twin-four barrel carbs, and Pontiac countered with a 285-horsepower mill, also with twin-quads. These were intended for racing, however, so very few -- if indeed any -- were installed in the wagons. Pontiac also boasted this year about its smoother-shifting "fluid-flow" Strato-Flight Hydra-Matic, which replaced the old Dual-Range Hydra-Matic on Star Chiefs.

Pontiac Star Chief Safari's 1956 two-tone paint treatment was separated by side trim which flowed in an exact reverse direction of the 1955 sweep. Nomad's two-tone paint drifted down to the lower body, giving the car a much flashier look. Taillights of both wagons became more elaborate, grilles widened and became heavier.

The dash of the 1956 Pontiac Star Chief Safari
PIL

Safari continued with all-leather upholstery, but due to the high cost, the Nomad's "waffle" seats and door panels were replaced by a combination of nylon-faced cloth and leather-grained vinyl, and these materials returned in a somewhat different application for 1957.

See the next page for more on the 1957 Pontiac Star Chief Safari.