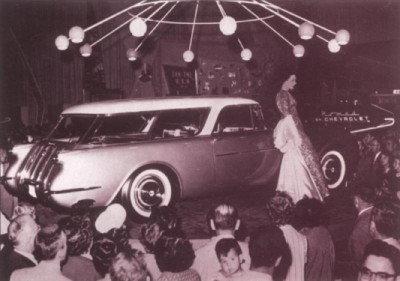 The Corvette Nomad was a favorite at the 1954 General Motors Motorama show.
PIL

Let's look back at those General Motors Motorama show cars and Harley J. Earl, vice-president of General Motors Styling Section from 1927 to 1958, who made those dreams come true.

Like all things General Motors in those days, Pontiac Star Chief Safari and Nomad styling began with Mr. Earl. In this case, it was a dream car based on the 1953 Corvette. That Corvette itself was the first General Motors dream car to go into production substantially unaltered, just five months after it debuted at the January 1953 Motorama at the Waldorf-Astoria Hotel in New York City.

As preparations were made for the 1954 Motorama, Clare MacKichan, who directed the Chevrolet Styling Studio from 1953-1961, was encouraged by Earl to see what could be done for a Corvette encore. At this point, work was begun on the 1954 Motorama Nomad, a station wagon version of the Corvette. Commented MacKichan, "As far as we can recall, Mr. Earl should get the credit for suggesting it."

By March 11, 1954, design work was largely completed, thought the rear wheel openings seen here are much smaller than on the production Nomad.
PIL

MacKichan continued: "The Chevrolet studio in 1954, unlike that of a year earlier, was deeply involved in the dream car project. Mr. Earl brought ideas in from many other areas. A young man named Carl Renner, who was working in a special studio, had come up with a sketch for a station wagon roof that caught Earl's eye.

"Bringing this idea to the Chevrolet studio, Earl asked that it be incorporated into a station wagon version, as one of the Corvette idea cars at the 1954 Motorama." As it turned out, a production open Corvette, a hardtop version, a fastback Corvair (combining the words "Corvette" and "Bel Air"), and the Corvette Nomad station wagon were shown.

Although Harley Earl had an elaborate plan for the Nomad roof -- the stainless steel rear portion would telescope, forming an opening -- it never got beyond the conceptual stage. But it did influence the final design, as the roof exterior had nine grooves in it, and the interior headliner was distinguished with corresponding horizontal chrome bows, a carry-through of Earl's concept.

This was explained by Earl, who at six-foot-four towered over the delicate and low Nomad, in an interview with The Saturday Evening Post in 1954: "To an average man, the Nomad's roof was now visible as a part of the car's conformation, So, for perhaps the first time in automobile history, we had to give this unbroken roof expanse a decorative treatment. We grooved it."

The 1955 Pontiac Safari shared its greenhouse, front doors, and tailgate with the Chevrolet Nomad.
PIL

The original Corvette Nomad was built on a 1953 Chevrolet station wagon chassis, had Corvette-like front and rear styling, and was a tasteful combination of two very popular body styles -- hardtop and station wagon -- which at the time made up one-third of the automotive market.

As it revolved on its Motorama turntable at the 1954 Waldorf-Astoria debut, the Nomad heralded a generation of stylish, luxurious station wagons to follow. Noticeable was its hardtop front door glass framing, wide B-pillar and forward-sloping rear quarters, wraparound rear side glass, full rear-wheel housing cutout, seven vertical accent strips ("bananas") on the tailgate, and the fluted roof.

It was reported that the Motorama crowds raved over the Nomad's styling, but MacKichan put it this way: "They were enthusiastic ... but I don't think that's what really got to Harley Earl. The friends he associated with were so enthusiastic that he told his manager, Howard O'Leary, to get me on the phone. He said, 'When I get back in two days, I want to see that whole car, and how you would do it on a 1955 Chevrolet.'"

To find out how these design ideas translated into the 1955 Pontiac Star Chief Safari, continue to the next page.