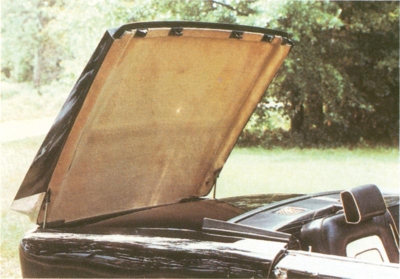 One of the more novel features of the 1955-1957 Gaylord was a retractable hardtop that disappeared into the deck.
©2007 Publications International, Ltd.

The styling of the 1955, 1956, 1957 Gaylord, by Brooks Stevens Associates, wasn't up to the engineering, mainly because of a contradictory goal: "a modern car with classic overtones."

For example, the Gaylords had wanted P-100 headlamps -- but they made the car look like a malevolent four-foot owl, and had to be scrubbed. They also wanted to revive the classic "open wheel" look. This was tried on the prototype, but proved impractical -- it allowed road grit to pepper the bodywork.

Conventional wheel wells were then used, the wheels decorated with Eldorado Sabre Spoke wheel covers bearing special "double G" emblems. The door design of the 1955-1957 Gaylord, which Stevens called the "Washington coach door," looked terrific -- a sleek upward cut, opening along the line of the ivory two-tone color panel, itself inspired by the classics.

Final touches of novelty on the 1955-1957 Gaylord were a retractable hardtop which disappeared into the deck, and a spare tire that slid out from a rear panel and flopped upright on the road, where it could easily be rolled into position.

The retractable top on the 1955-1957 Gaylord -- much simpler than the later Ford Skyliner's -- required only one motor for the whole operation, and the sequence could be reversed at any point. When GM's chairman saw the Gaylord top retract at the Paris Auto Salon in 1955, he remarked to his cadre of engineers, "You bastards told me this couldn't be done. So how did these idiots do it?"

Shown widely in America and Europe during 1955-1956, the Gaylord was ordered by everybody from Dick Powell to King Farouk, but the project lingered, withered, and fell apart -- in the end only a show chassis and three complete cars were built.

Tremendous problems of fit and finish occurred with the bodies on the 1955-1957 Gaylord, built by Spohn (prototype) and Luftschiffbau Zeppelin (later models). In the midst of a lawsuit against Zeppelin for failing to perform, the strain got to Jim Gaylord and he had a nervous breakdown. His family prevailed on him to let the project die.

The prototype 1955-1957 Gaylord with open wheel wells was broken up, and one "production" car disappeared in Europe -- it may still exist. The third car, along with a magnificently crafted show chassis, is on display at the Early American Museum in Silver Springs, Florida, to which it was donated by the Gaylords. It remains a monument to two bright guys, a benchmark in automotive history.