Where there's a choice, collectors invariably covet the convertible and hardtop coupe over other body styles in a given car line. One of the few exceptions is the Bel Air line, in which the 1955-1957 Chevrolet Nomad is perhaps the prettiest wagon ever built and a car with immense, longtime appeal simply because it's a "classic Chevy."

"The Corvette theme was a popular one," he recalled, and "Renner ... had come up with a sketch for a station wagon roof that caught Earl's eye. Bringing this idea to the Chevrolet studio, Earl asked that it be incorporated into a station wagon version as one of [three] Corvette idea cars for the 1954 Motorama."

The result was the Corvette Nomad, a non-running prototype with fiberglass bodywork on a 1953 Chevrolet wagon chassis. Renner's roof nicely suited the lower body lines of Chevrolet's recently announced sports car and the name was perfect.

Unveiled in January 1954, the Corvette Nomad was such a hit that an Earl assistant hurriedly ordered MacKichan to adapt its roofline to Chevrolet's forthcoming 1955 passenger-car styling -- in just two days.

Renner hustled. "The [show car's] roof was taken from a full-size drawing, cut apart, stretched out, and mated to the ... 1955 Chevrolet lower body," said MacKichan. "The hardtop front-door glass framing, forward-sloping rear quarters, wide B-pillar, fluted roof, wraparound rear side glass, the rear wheel housing cutout, and the seven vertical accent strips on the tailgate were all retained in a remarkably good translation from the dream car."

Aside from all-steel bodywork, the production Bel Air Nomad differed in using a conventional liftgate -- a heavy, chrome-plated affair -- instead of the show car's drop-down tailgate window. The "fluted roof" refers to the nine transverse grooves at the rear, a visual remnant of Earl's plan for a retracting stainless-steel section that was quickly nixed by leak worries and high cost. 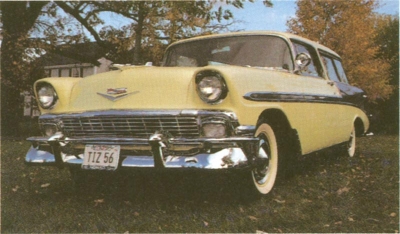 By 1957, trim on the Chevrolet Nomad was almost identical to the Bel Air.
©2007 Publications International, Ltd.

The 1955-1957 Chevrolet Nomad is a rare collectible station wagon, made desirable by styling that was initially inspired by the Corvette.