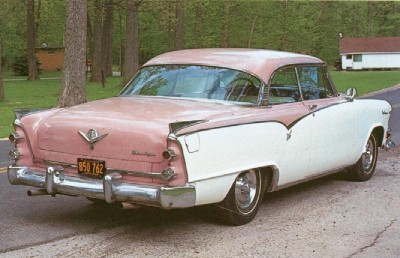 The 1955 Dodge La Femme interior followed the feminine theme. To set the La Femme apart from other Dodges, designers spared no effort in creating an exclusive -- and feminine -- interior for "Milady."

La Femmes for 1955 came with tapestry-style cloth upholstery, in a pattern of pink rosebuds woven into a pale silvery-pink background. The material was also used on the door panels surrounding the door handles.

The rosebud pattern was repeated -- on the vinyl material used to make the umbrella, its zippered sleeve, the rain hat, raincoat, rain boots, as well as portions of the interior. The cloth upholstery was the weak point of the interior, however, deteriorating at a rapid rate over the years.

The headliner fabric was either pink or white, the carpeting a dark burgundy loop pile, and the steering wheel was black and white with a totally pink steering column. Even the rubber molding on the steering column was painted pink. The inner rubber surrounding the rear window was either black or painted white with the same type of special flexible paint used on other Dodges that year.

The 1955 La Femme sales brochure described the interior trim as leather, but all La Femme owners agree that the seats and doors of all 1955 La Femmes were trimmed with pale pink vinyl, which was not the Heather Rose color mentioned in the brochure, which also neglected to mention the rain hat, umbrella sleeve, and purse accessories.

The brochure further showed an all-pink dashboard, which in production was black on top, pink on the bottom; likewise, the white taillight area turned to pink as production got underway. All in all, a typical sales brochure -- long on rhetoric, short on accuracy.

The rhetoric from the 1955 brochure included lines such as: "La Femme by Dodge . . . in mood and manner a distinctive car for the discriminating, modern woman." And, "now for the first time anywhere, a car glamorously, Personally Yours."

The addition of a purse made the 1955 La Femme better equipped than the 1956 model.

And just to make sure no one misunderstood, the key line on the front of the brochure read, "By Appointment to Her Majesty . . . the American Woman."

La Femme's special appointments for "Her Majesty" were housed in two containers made of heavy cardboard and vinyl. On the seat back behind the driver, the container wore pale pink vinyl on the outside, with the pink rosebud design printed on the vinyl used inside.

The container on the passenger side looked the same, except that it had a large, keystone-shaped opening to accommodate the purse. Both containers consisted of three compartments, a large one in the center, and a tall narrow one on each side. When suitably folded, the umbrella and hat fit into the narrow compartments.

The fact that Dodge offered a three-tone color scheme -- pink, white, and black -- on the Custom Royal Lancer sometimes causes confusion in identifying the La Femme. No 1955 La Femmes used black as a third exterior color, although the wheels were painted black on some cars (pink on others).

Also, some interior and exterior details on La Femmes vary slightly from car to car. In any case, the gold script on the front fenders identifies the model. If it says Royal Lancer, it's not a La Femme.

Continue to the next page to follow La Femme into its second and final year, 1956.