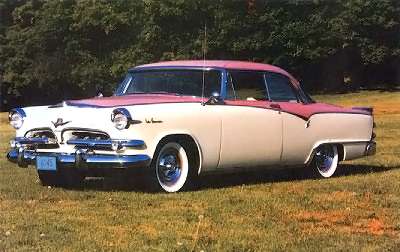 The exterior colors of the 1955 La Femme were chosen to appeal to women.

The long, clean, sleek styling of the all-new 1955 Dodge La Femme was part of what Chrysler Corporation called "The Forward Look," a design theme that began to wrest styling leadership from industry leader General Motors. In fact, Dodge was so vastly altered for 1955 that it didn't seem at all related to its shorter and taller predecessors, which suddenly seemed antique.

Dodge touted its styling as "Flair Fashioned." The front of the car was marked by two large horizontal bars that wrapped around from the front fenders into a divided grille cavity. A dummy scoop appeared at the front of the hood and flared outward back to the rear fenders as an upper body molding with a "dip" in the rear quarters.

Cheaper models were two-toned at the belt line and looked chunkier. Upper-priced models carried slim, chrome-plated tailfins, the embryonic expression of an idea of stylist Virgil Exner that would grow in 1956 and explode for 1957.

The dashboard was asymmetrical and very stylish, with instruments and controls grouped on the left. Cars equipped with PowerFlite were shifted via a novel "Flite Control" lever that stuck out of the dash to the right of the steering column. And like most everyone else in the industry, Dodge featured tubeless tires and a larger windshield, the latter a "New Horizon sweep-around" unit.

The 1955 Dodge La Femme was fitted with a compact to suit the woman on the go.

All Dodges rode a longer, 120-inch wheelbase for 1955. The model lineup was simplified: Coronet sixes and V-8s, Royal and Custom Royal V-8s. Two-door hardtops were subtitled Lancer along with the Custom Royal convertible, which topped the line at $2,748.

Most of the 1955 Dodge lineup was introduced to the public on November 17, 1954. The top-of-the-line two-door hardtop and convertible Custom Royal Lancer were unveiled exactly one month later, but the special trim models had to wait several months more.

This was obviously to demonstrate the ease with which the "weaker sex" could operate heavy machinery. Men were depicted in the owner's manual as shadowy figures, usually wielding gas nozzles or garden hoses.

Was Dodge, so obviously targeting its sales approach to women, hinting indirectly that the La Femme was coming? The advertising line, "Expect the unexpected in Dodge for 1955," suggested as much.

See the next page to learn about the introduction of the 1955 La Femme to the public.