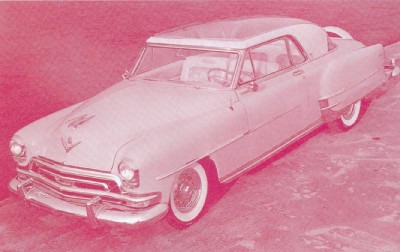 The 1954 La Comtesse show car was painted pink and pale gray to appeal to the feminine sensibility.

Actually, 1950s show cars designed for women were fairly common in that era. General Motors fielded quite a few of them, including such cars as Pontiac's pink Parisienne, Chevrolet's Impala Martinique, and Cadillac's Eldorado Seville Baroness, among others.

But it was Chrysler Corporation that got the ball rolling in 1954 when it took the La Comtesse and Le Comte around the auto show circuit. The former was pink and pale gray, to appeal to the feminine sensibility, while the latter sported bronze and black, very macho indeed. A Chrysler press release of the day described the lady's version thusly:

"A long, low note is provided by heavy chrome molding running along the lower body of the car from the front wheel openings to the rear bumper. A continental tire mount and chrome wire wheels add to the car's smart appearance.

The Le Comte was perceived to be more masculine with its macho black-and-bronze exterior.

Very little is known about Le Comte. It was said to be identical to La Comtesse in almost every way except for the color scheme. Rumor has it that five La Comtesse show cars were built in Chrysler's Los Angeles plant and that at least one still exists in the Monterey, California, area.

Millions of people saw the two cars at Chicago, New York, and various other auto shows throughout the U.S. Public response seems to have encouraged Chrysler Corporation -- and Dodge division in particular -- to come out with more show and production cars with a similar feminine theme.

To learn about Dodge's contribution to the female-appeal craze, the 1955 Dodge La Femme, continue on to the next page.