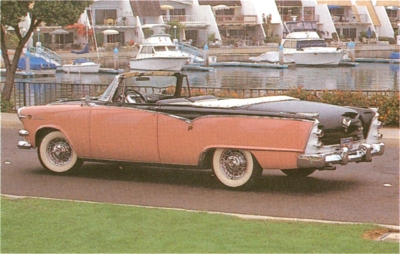 Having made its performance point for 1953-1954, Dodge emphasized styling for the 1955-1956 Dodge D-500. Not that it stood pat on performance -- no make could afford to, what with the horsepower race tighter than ever -- so the 1955s became not only the most potent Dodges ever, but among the fastest cars in all Detroit.

If not totally new, they were unquestionably different from any Dodges than had gone before -- part of the sudden, dramatic swing to high power and high style evident throughout the 1955 Chrysler Corporation line. This meant bolder, brighter cars -- such as the Dodge D-500 -- with bigger engines and mostly longer wheelbases -- in Dodge's case a new 120-inch span across the board, up 1.5 inches from 1953-1954.

Offerings were blissfully simplified into Coronet sixes and V-8s, and V-8-only Royal and new Custom Royal models. Hardtop coupes were subtitled Lancer along with the Custom Royal convertible, which topped the line at $2,748.

Though Virgil Exner oversaw the styling of Chrysler Corporation's 1955s, Dodge and Plymouth received the attention of his assistant, Maury Baldwin. All the firm's cars embodied the "Forward Look," Dodge calling its version "Flair-Fashion." Announcing the Dodge D-500 was an aggressive snout with two large horizontal bars wrapped around from the sides into a divided grille cavity.

A dummy scoop appeared at the front of the hood and flared outward and back toward the cowl. On some models this ran to the rear fenders as an upper body molding, dipped near the C-pillars; in a contrasting color, the area thus defined made what was still a rather high-sided body look lower. Cars conventionally two-toned at the beltline looked a lot chunkier.

Other features included "New Horizon" wraparound windshield and, for Custom Royal Lancers, embryonic chrome tailfins. Wild three-tone paint jobs could be had on Custom Royals, with different colors on roof, body sides, and the hood/deck area.

Dodge's famed "Red Ram" V-8 expanded to 270 cubic inches for 1955 -- but wasn't necessarily a true hemi. It was if you bought a Custom Royal, where you got a Super Red Ram with an ample 183 horsepower.

Otherwise you got what Chrysler termed a "polyspherical" engine. Its key difference was intake and exhaust valves placed diagonally across from one another rather than directly opposite, which permitted a single rocker shaft for each cylinder bank instead of two and improved plug accessibility. With lighter rocker arms and this simpler valvetrain, the poly weighed less and cost less to make than the hemi, yet retained most of its desirable breathing qualities. Most of its power, too: 175 bhp.

Dodge unveiled a host of new options in 1955, but the 1955-1956 Dodge D-500 was arguably the most powerful -- Dodge offered an extra-cost "Power Pack" for the hemi-four-barrel carb and dual exhausts adding 10 horses. With it, the hemi was officially (and clumsily) called the "super-powered Super Red Ram," but soon became known simply as the "D-500" option.

The Dodge D-500 returned for 1956 on a hemi stroked out to 315 cubic inches. Larger valves, mechanical lifters, reprofiled camshaft, and higher compression (9.25:1) gave it a mighty 260 horses, close to double the maximum power Dodge had offered just two years before. A two-barrel, 218-bhp version of the Dodge D-500 came standard on Royal and Custom Royal. Coronets retained the poly at a slightly more muscular 189 bhp.

Dodge's mild 1956 face-lift brought higher, finned rear fenders to all models, which now included V-8 Lancer four-door hardtops in each series, including the Dodge D-500. As on other Chrysler makes, control of the optional Powerflite automatic changed from the chromed corporate dashboard wand of 1955 to the soon-to-be-infamous pushbuttons.

Highland Park went more heavily into high-performance limited editions for 1956, issuing the new Plymouth Fury and DeSoto Adventurer to supplement the follow-up version of the hairy Chrysler 300. Little appreciated is the fact that Dodge had a similar special, the Golden Lancer. This was basically a Dodge D-500-equipped Custom Royal hardtop coupe with Sapphire White and Gold Gallant Saddle paint; gold-colored dash, windshield, and door moldings; and patterned white/gray/black upholstery. Production is unknown, even to Chrysler, but was doubtless minuscule.

Equally rare was "La Femme," a new-for-1955 trim package offering umbrella holder, makeup case, and a dazzling pink-and-white exterior in a patronizing nod to women buyers typical of the age. The 1956 La Femme kept most of milady's accessories, but the colors changed to Regal Orchid over Misty Orchid. Limited to the Custom Royal hardtop coupe -- and available with the Dodge D-500 option -- it sold fewer than 1,500 copies through 1956 (estimates range from 300 to 1,100), after which it was tastefully withdrawn. 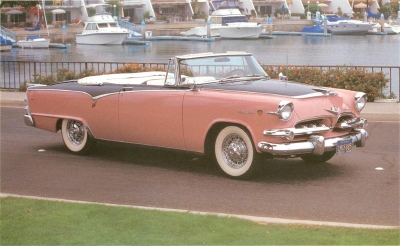