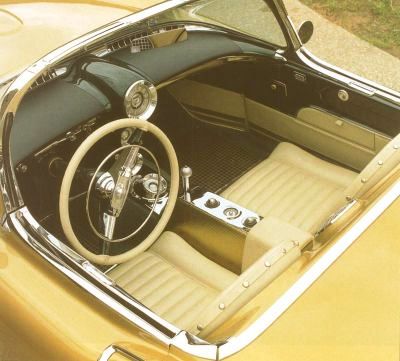 The convertible top was a common show car characteristic during this time.

Here is yet another interesting point about the 1954 Oldsmobile F-88: Krueger says that while a few parts were missing and he had to make them from scratch, the crates contained more parts than were needed to finish the car. It seemed to him that whoever filled those crates put in not only the parts from a previously assembled car but some spare parts in addition. It looked like everything General Motors had for this car got boxed up and shipped out.

No one knows why an apparently complete 1954 Oldsmobile F-88 got taken apart, but it is believed that, that's what happened. Many believe that the surviving Oldsmobile F-88 is the golden Motorama car, which was taken apart and sent to E. L. Cord along with all the miscellaneous related parts GM had lying around. Disassembling the car and sending it to Cord may have seemed to Wolfram or Earl close enough to destroying it to satisfy GM's crusher edict.

Another question still lingers: Who actually authorized the crating and shipment of the Oldsmobile F-88 to E. L. Cord? A comfortable answer to that one may never be found. Even the very capable and cooperative Ed Stanchak of the Oldsmobile History Center in Lansing could not come up with any answers.

Some of the ex-GM people consulted for this article speculated that the shipping order might have originated with someone high up at Oldsmobile, like general manager Wolfram. Wolfram might have sent the car back to GM Styling and asked Earl to have it disassembled and shipped. But most of the people that were interviewed felt that the shipping order most likely originated with Earl himself.

Earl might have gotten the golden car back for some reason, and, since he was already driving the red car, had no need for it. Earl surely knew Cord, although they weren't really close friends. Still, their acquaintance was confirmed by Harley Earl's son, Jim, as well as Charles Cord.

Interestingly, the name requesting shipment on GM Styling Section packing sheet SS-532 is that of Ken Pickering. Retired since 1989, he'd trained as an engineer, albeit with a flair for design. He started at Fisher Body in 1949 and moved on to GM Styling in the autumn of 1952. Until 1954, he worked under Fred Walther in Styling's experimental engineering department.

Even door-hinge geometry could help unlock a few of the secrets behind the 1954 Oldsmobile F-88.

This was where the various show-car mechanisms, like convertible tops, windshields, door-hinge geometry, etc., were developed for fabrication. Ken recalled working on the Oldsmobile F-88. But when asked why it was shipped to E. L. Cord, he responded that he'd searched his memory, even called some old friends, but finally said, "I just cannot imagine why we did that."

The 1954 Oldsmobile F-88 has managed all these years to keep its secrets, and it probably always will. Unless records exist somewhere within GM Design Staff -- the library there was not searched -- it is doubtful that anyone will ever know for sure which 1954 Oldsmobile F-88 still exists, or who was responsible for letting it out of the corporation's grasp in the first place. Even with all we know, there's still an awful lot we don't.