1954 Oldsmobile F-88 and the Barrett-Jackson Auction 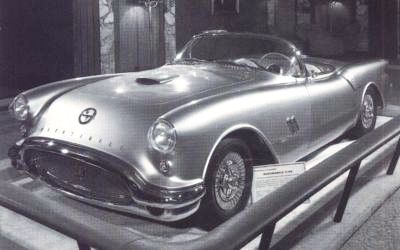 The original F-88 on display. The placard beside the car describes it as "The Last Word in Convertibles!"

At the 1991 Barrett-Jackson Auction, the 1954 Oldsmobile F-88 was sold to Bruce S. Lustman, a vintage racer and collector of competition Ferraris and Jaguars who now lives in Colorado, after having retired from a large Connecticut surgical instrument firm. The Oldsmobile F-88 remained in Lustman's possession for about six years, during which time he showed it in Chicago and at Pebble Beach.

In 1997, the Oldsmobile F-88 went back to Don Williams on consignment, and Williams again placed it in his Blackhawk showroom. That year, Oldsmobile borrowed the car from Blackhawk to help celebrate the division's 100th anniversary.

The car somehow was damaged in transit, and the transport company paid Sun Valley Classics to repair the broken fiberglass and repaint the car. Krueger returned the Oldsmobile F-88 to Blackhawk, after which Don Williams sold it to Gordon Apker. Several questions remain. First, which of the 1954 Oldsmobile F-88's is this survivor? Is it the Motorama car or Harley Earl's duplicate?

It's definitely not the red car, says Dick Henderson, because sometime after 1955, GM Styling removed the 1954 body and redid it as the Mark II, using the same chassis and engine. This second-generation Oldsmobile F-88 was painted a light metallic blue, according to Henderson. It eventually ended up with Oldsmobile Division, and Henderson has no idea what happened to it after that. He never saw it again.

So the 1954 Oldsmobile F-88 that Apker owns today is probably the original golden Motorama show car that ended up with Oldsmobile. Lon Krueger says that when he got the car, the main body shell was all put together, but the external surfaces weren't painted. However, the inner fenders and the bottom of the floorpan were -- in metallic green -- same as the Motorama Oldsmobile F-88.

There is one other possibility. Henderson points out that the salvaged Oldsmobile F-88 could be an entirely different car made up of backup parts and a third set of body panels. It would have been easy enough to pull one more complete fiberglass body off the existing female plaster molds. And it wasn't that unusual to make spare parts just in case something happened to the original show car.

That could explain, too, why E. L. Cord got crates of parts and blueprints instead of an assembled car. Lon Krueger told me that some of the parts in those crates had obviously been mounted on a car before, however. The 1954 Oldsmobile F-88 emblems, for example, still had black dumdum on the retaining spikes.

The windshield came with its rubber molding in place. And the body itself had obviously been assembled in a jig, because no one could have fitted the panels together so precisely and seamed the joints so neatly without one.

In the next and final section of this article, read more about the many secrets the 1954 Oldsmobile F-88 still manages to hide.