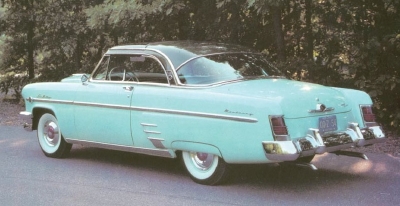 The 1954 Mercury Sun Valley was the beneficiary of one of the more memorable advertising campaigns of the 1950s. "The heart of a city at night gleams with its own stars of neon and marquee. This is a magnificent sight ... All the richness and color reaches you. Yet the intensity is softened, filtered by the tint of the plastic roof ...

"You stop for a traffic light. You glance up through the top at the overhead signal. It turns green and you continue your pleasant journey -- completely, wonderfully at ease."

The honeyed words came from a brochure Mercury created for the 1954 Mercury Sun Valley. Together with its counterpart, the Ford Crestline Skyliner, it was the first production car with a roof you could see through. Between the two of them, the "glasstops" found 23,000 buyers in 1954. Though Ford's version outsold Mercury's, the Sun Valley expressed the essence of the idea, the best form it ever took.

Of course, the idea had many antecedents. Designers began thinking about "bubbletoppers" in the late 1930s, as plastic began to be accepted as a structural as well as decorative material.

John Tjaarda, working for body-builder Briggs, developed the first such application -- a one-piece plastic top for a 1939 Plymouth convertible sedan. At Ford after the war, show car predecessors of the 1954 Mercury Sun Valley were the X-100 and XL-500, the latter a 1953 model with a transparent top bisected by a forward-leaning rollbar. As late as 1956, when the last production Skyliners were rolling off the assembly line, Ford exhibited the Lincoln Futura with its twin plastic cockpits.

The 1954 Mercury Sun Valley received ample publicity, claiming "A freshness of view, a new gaiety and glamour, vast new areas of visibility, a whole new concept of light and luxury ... you're comfortably 'out of doors' all year long ... with that wonderful feeling of being fashionably first." Actually, much of this happy puffery rang true, with certain qualifications.

To see how the 1954 Mercury Sun Valley lived up to its publicity hype, go to the next page. 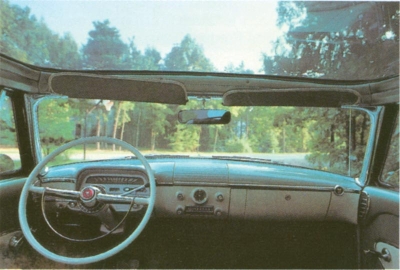 The 1954 Mercury Sun Valley may have been heavily promoted, but publicity was not its problem. The big problem was heat. To keep it down, the plexiglass section had to be tinted sun-glass green (though ads used an untinted type to show off the interior). Thus, the light that filtered inside seemed "kind of weird," according to Motor Trend, "and may cause many a young lady to check her makeup. She might as well switch to green lipstick."

And, though desert testing claimed only a five-degree difference between a 1954 Mercury Sun Valley and a normal hardtop interior, Mercury offered a snap-on interior shade for high summer. Air conditioning, although available in 1954, cost an arm and a leg, so few Sun Valleys had it.

The 1954 Mercury Sun Valley came in only two color combinations: yellow or mint green, both combined with a dark green top. Interiors featured yellow and dark green all-vinyl upholstery (which must have been uncomfortable), and white cloth-green vinyl. Gold "Sun Valley" script adorned the front fenders. Sun Valleys cost quite a lot -- $2,582 in 1954, compared to only about $2,150-2,250 for the Ford Skyliner.

With its bubbletop, the 1954 Mercury Sun Valley would have been merely an oddity, but the 1954 Mercury was generally an exceptional car. The Ford design generation of 1952-1954 was modest for the period: taut, clean, without chromium excesses, smoothly executed, and functional.

The 1954 Mercury Sun Valley emerged cleaner still, especially at the extremities. Its attractive taillights, fared into the rear fenders, could easily be seen from the sides and had fluting similar to that of later Mercedes, and which deflected road grime.

At the front rode a simple, one-bar grille under a crisp hood with a dummy airscoop (probably the only non-functional aspect). The dashboard, likewise clean and honest, featured aircraft-like toggle lever controls.

Mercury also debuted its all-new overhead valve V-8 in its 1954 Mercury Sun Valley; it displaced almost as much volume as its flathead predecessor. But whereas the flathead was a "stroker," the new Mercury V-8 boasted an oversquare configuration and developed a lot more power.

Its novel four-barrel carburetor featured an inlet vacuum which replaced the mechanical linkage to the two rear Venturis, plus dual floats and a concentric fuel bowl. Other mechanical niceties of the 1954 Mercury Sun Valley included Mercury's first ball-joint front suspension, only four grease fittings, and more insulation than ever. But the unique feature remained that see-through top. Although all 1954 Mercurys had a lot of glass, the Sun Valley offered more square inches of visibility than any other car, including the 1954 Kaiser, which of course had a solid roof.

Mercury would field another Sun Valley in 1955, but whatever market existed had already been satiated, and so it found only 1,787 takers. No matter: the original stood out as the best.

Keep reading to learn about the specifications of the 1954 Mercury Sun Valley.

Though the 1954 Mercury Sun Valley didn't sell particularly well at the time (only 9,761 units), collectors avidly seek them out now.
©2007 Publications International, Ltd.