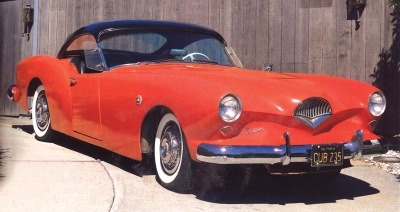 Dutch bought a number of unsold 1954 Kaiser-Darrins after production ended and sold them at his Hollywood showroom. Some were converted to Cadillac V-8 power.

The 1954 Kaiser-Darrin carried a tall price, but there were a lot of standard goodies: the three-way landau-type top, overdrive, the tinted windshield, windwings, windshield washers, electric wipers, whitewalls, side curtains, tachometer, stainless-steel wheel covers, and more.

GM Hydra-Matic was said to be optional, but was never listed. Four colors were available: Champagne (an off-white), Pine Tint (light green), Red Sail, and Yellow Satin. Special factory-order cars were plentiful. For instance, SFO number 65 occurred on car 271, suggesting that perhaps 100 of the 435 were customized in some way.

At least two of the early production Darrins were equipped with McCulloch centrifugal superchargers, perhaps out of frustration with the Willys engine, whose performance did not equal that of the tri-carb L-head. Weighing only a bit over a ton, the stock F-head Darrin was a modest performer, out-hauled by the six-cylinder Corvette. But the blower made it America's quickest 1954 sports car, as you'll see in the figures below.

More rapid yet were the 331-cid Cadillac V-8 conversions that Dutch carried out and sold after Kaiser left the car business. Priced at $4,350 each, they had 304 horsepower and were said to approach 140 mph.

Mrs. Briggs Cunningham campaigned one in Sports Car Club of America races and finished first at Torrey Pines, one of the few Darrins to win in open competition.

Darrin production began in January 1954, with final assembly at the near-idle Jackson, Michigan, plant where most of the specially trimmed Kaisers had originated. But Kaiser-Willys (as K-F had become by then) opted out of the passenger-car business within a year, leaving 100  Darrins lying around the factory with no takers (most dealers had already quit).

In the Kaiser-Frazer history, Last Onslaught on Detroit (an inappropriate title in view of what's happened since), the author called the Kaiser-Darrin uncompetitive -- not as quick as the Corvette, not as posh as the forthcoming Thunderbird -- and pointed out that the vaunted sports-car market was really very small, only 0.27 percent of the American market.

In retrospect, this judgment may have been too harsh. Despite its high price, the Darrin was an interesting boulevardier sports car: mechanically unsophisticated to be sure, but dashing, even with Dutch's grillework -- which one critic said, "always looked like it wanted to give you a kiss."

Ironically, while GM and Ford could not justify their two-seaters' then-low volume, Kaiser could have sold a few thousand Darrins a year at a decent profit.

In a broader sense, though, the Darrin symbolized one of Detroit's last one-man styling shows and his eternal frustration with the committee approach to design, manufacturing, and marketing.

"Dutch could have done so much for the company," said Arnott "Buzz" Grisinger, one of Kaiser's many talented designers. "But his arrangement was a royalty per car, and often he gave us the impression that he was all for Dutch getting everything. This made him uncompromising, even to the cost of the end product . . . It had to be his way, which was the only way."

When confronted with that complaint, Darrin said, "I know I was rough. I was younger then and more anxious for the company's success. I just felt that I was right, that I had proved I was right, and despite this they were going to do something that was wrong . . . That's the advantage of hindsight -- you don't make the same mistakes."

Hindsight at least suggests that Dutch had created something special in his sliding-door sports car. Collector demand had already far outstripped supply by the early 1960s.

Today, well over 300 Darrins are known to survive, and they've long been among the most valuable of Henry J. Kaiser's automobiles. Dutch was proud of that through the day he died.