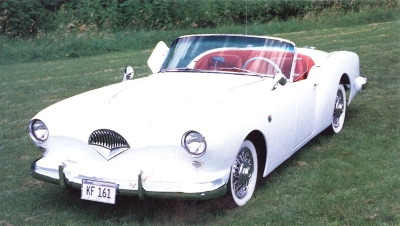 After some debate, the principals -- mainly Henry Kaiser -- se

When the time came to name the 1954 Kaiser-Darrin, Dutch was again favored by his warm relationship with the Henry Kaiser.

"At first the execs wanted to call it the DKF for Darrin-Kaiser-Frazer," he remembered. "This was confusing. There was a DKF motorcycle and a DKW car . . . All the heads of the Kaiser industries then met in Oakland to resolve the problem . . . As each executive voted, it was yes for DKF, no for Darrin. It looked like a landslide -- until Henry Kaiser spoke up softly: 'I haven't voted.' 'Oh, Mr. Kaiser, surely we want you to vote,' came the reply. And Henry smiled at me and said, 'I vote we call it the Kaiser-Darrin. Period.' "

Dutch loved old Henry Kaiser. "He was a very, very astute, perceptive, and far-seeing man, but I think he was hampered in the car business by all those sycophants. He once came down to the studio to look at a model, and as he walked in the door I said to him, 'No.' 'Why, Dutch,' he said, 'I haven't even asked you a question.' I said, 'I don't care. You've got too goddamn many yes-men around, and this time the answer is no, regardless!' We laughed, but it was true."

Glasspar was approached to build the Darrin bodies, and a number were run off by the end of 1953. How many is a mystery. Ward's Yearbook reported that 62 Darrins were built in 1953 and 435 "production" models in 1954. However, serial numbers do not exceed 435, and the highest numbered car with a nonstandard serial is suffixed X-8, apparently the eighth experimental.

Furthermore, only one "1953" Darrin has ever been found, though it's possible that most of the others were converted to 1954 specs.

In any case, the early cars differed noticeably from the production models in having a split windshield, hand-fitted leather upholstery, full-length decklid, a set of Stewart-Warner gauges spread all the way across the dash, 24-spoke dummy wire wheels, triple carbs, and a lower front fenderline.

The last was subsequently raised to meet 48-state headlamp height requirements -- and produced another Darrin blow-up.

"Did you ever hear of putting larger tires on the wheels?" he demanded of quivering chief engineer George Harbert. "This is a sports car. It could have used larger tires." Harbert said the thought had occurred, but too late. Yet the 1954 still looked great, and Dutch gradually came to accept it.

Only one 1953 Darrin has ever been found, though it's possible that most of the others were converted to 1954 specs.

What killed the Darrin, of course, was the demise of its maker. The sliding door may have needed development, but that could have been worked out had things worked out differently for K-F. In fact, if Harley Earl had thought of it, we might have sliding-door Corvettes today.

Other changes made before series production included a top well independent of the trunk, separate lids for each, one-piece tinted windshield with a darker band at the top, parking lights (shaped to mimic the grille), a more professional-looking interior with pleated vinyl upholstery (leather cost extra), and a revised dash with gauges clustered on the left and thick crash padding on the right.

Seatbelts were offered -- their second appearance on a U.S. car after Nash had dropped them as bad press in 1951 -- and Henry J bumper guards were added. Finally, K-F switched to the F-head Willys version of the 161 engine, with single carburetor and a rated 90 horsepower.

List price was set at a lofty $3,668, more than a contemporary Cadillac 62 or Lincoln Capri. A $62 heater was the only extra initially listed, though the belts and multi-spoke wire wheel covers were soon added, and Darrin himself designed a sleek GRP accessory hardtop.

So was the 1954 Kaiser-Darrin successful? Find out in our final section.