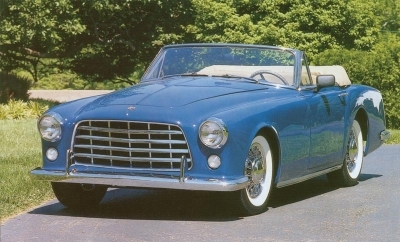 Heir to a steel cable business, Edwards was a successful race-car driver on the West Coast in the early- and mid-1950s. He constructed his own race cars.

The first was a sports racer with four-wheel independent suspension and Ford V-8 engine. The second used a Chrysler "hemi" stuffed into a Henry J chassis.

Though financed by Edwards, actual work was carried out by Phil

Remington -- who later did fabrication and engineering on the Ford GT-40.

Styling was influenced by an Italian Cistitalia Edwards saw at the 1948 Winter Olympics in Switzerland. The Edwards America had clean, delicate lines, but with a massive hood housing a huge American V-8.

The prototype seen here used a strengthened 100-inch Henry J chassis powered by an Oldsmobile Rocket V-8 with Hydra-Matic transmission. To keep costs reasonable, the body was fiberglass with trim from the parts bins of various U.S. manufacturers.

The Henry J frame was not quite strong enough, however. Later cars used a 1950-1952 Mercury wagon frame reinforced and cut down to 107 inches. The Olds was replaced by Lincoln or Cadillac V-8s. A hardtop coupe also was offered.

The style of the Edwards America was influenced by an Italian Cistitalia.
©007 Publications International, Ltd.

A well-trimmed leather interior and Kelsey-Hayes wire wheels added to the sporting luxury image Edwards sought to create. Workmanship was first-rate throughout.

In spite of saving money by using mass-produced parts, the America was costly to build. Price initially was $6,769, but rose to about $8,000. Even then, Edwards lost money on each car.

Production ended in late 1954 after only five cars, including the prototype, had been built.