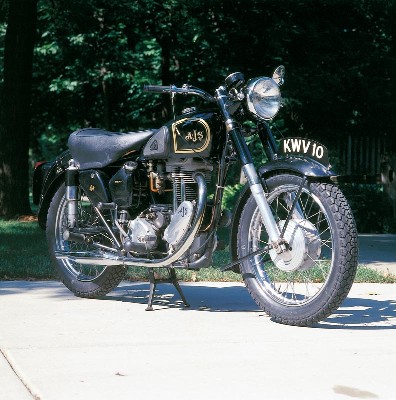 The 1954 AJS motorcycle was a British bike virtually identical to motorcycles manufactured under the Matchless brand. See more motorcycle pictures.

The 1954 AJS motorcycle is named after Albert John Stevens, who, along with his brother, built engines for use in the frames of other manufacturers during the early 1900s. In 1909 the Stevens brothers would finish their first complete motorcycle.

AJS built singles and V-twins in the years before World War II and took home several trophies in the early days of TT racing, which would help sales for many years.

AJS continued as an independent manufacturer until 1931, when financial woes forced it to join forces with the Matchless Company to form Associated Motor Cycles (AMC). Although both lines continued under their own names, they became synonymous in construction, differing only in badging and trim.

The 16M was the first post-war AJS to be released. Its mechanical roots dated back to the models of 1935, though improvements had been implemented in the intervening years.

The 16M breathed through larger Amal carbs in 1954 and also had a new automatic ignition-advance mechanism that made riding more pleasant. To make room for this revision, a new side cover was installed, easily identified by a hump in its surface.

In the postwar era, AJS offered singles and, after 1949, vertical twins. Much like early Fords, AJS cycles of the 1950s were always finished in black, as were their Matchless siblings.

However, AJS models wore gold striping, while their Matchless counterparts were trimmed with silver. Unfortunately, this was hardly enough to differentiate the two, and loyalties to both brands faded.

AMC had purchased ailing Norton in 1952 but resisted the temptation to roll that marque into the same badge-engineering program as AJS/Matchless -- until 1964, that is.

First chassis components and then engines were shared, none of which helped sales of any of the makes, and AMC folded in 1966. Matchless was gone for good, but Norton continued under Norton/Villiers, which sold an AJS-badged dirt bike into the mid 1970s.

See the next page for more pictures of the 1954 AJS motorcycle. 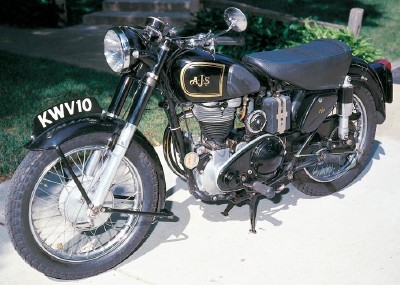 AJS was an independent manufacturer until 1931, when it joined forces with the Matchless Company. The 1954 AJS wore gold striping, while its Matchless Company counterparts were trimmed with silver.

An AJS selling point was that its components were interchangable with those of Matchless.
AJS bikes had distinct generator-drive covers.
AJS used gold trim; Matchless decorated with silver.