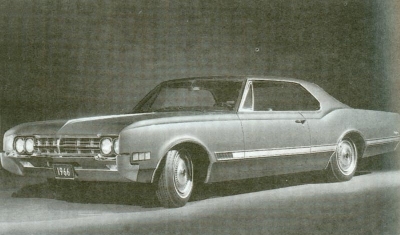 The 1966 Starfire only came in the coupe, which sported a new grille and side trim.
©2007 Publications International, Ltd.

The Starfire slipped quietly from the Oldsmobile roster after 1966, replaced by the dramatic all-new Toronado. The name didn't die, however, for it was revived in 1975 for an unabashed Chevy Monza clone, which itself was basically a recycled Vega. The little Starfire hatchback was retired without fanfare after the 1980 model run.

The year 1987 marks the 90th anniversary of Oldsmobile in the automobile business. During six of those years a production run of nearly 120,000 Starfires was made. For most of its tenure, the Starfire rightfully reigned as the top-of-the-line Oldsmobile.

Certainly there were flashier cars in the Sixties, but when compared to its lowlier brethren -- the 88s, Ninety-Eights, and Jetstars -- the Starfire stood out proudly as Oldsmobile's flagship. It should also be accorded its historical slot as Oldsmobile's first venture into the personal-luxury field.

While it certainly wasn't the "sports car" that Olds PR types and marketers of the day labeled it, it was a solid automotive value -- all traditional Oldsmobile from bumper to bumper.

The Oldsmobile Starfire managed to hold an important door open through the mid-Sixties until the revolutionary Toronado was ready to roar through to genuinely stun the American automotive market.