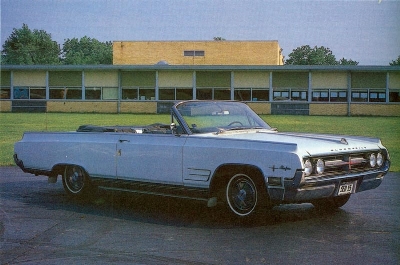 The major appearance change on the 1964 Starfire was the disappearance of the brushed-aluminum side trim, which was traded for a lower front fender air outlet.
©2007 Publications International, Ltd.

By model year 1965, the end of the line for the Starfire series was evident, although still a bit off. This would be the final year for the convertible, the model that started it all off in 1961. Traditional outside rivals continued to outsell the Olds personal-luxury model by large margins.

A redesigned 4-4-2 package, this year benefiting from a larger displacement engine, doubtless took customers from the Starfire line as well.

Although they continued on a 123-in. wheelbase, the all-new full-size Oldsmobiles received curvier sheetmetal for 1965. A new Turbo Hydra-Matic was standard equipment and for the first time in the history of the big cars a four-speed manual transmission could be ordered at extra cost.

The big news came under the hood, however, with the introduction of a larger 425-cubic-in. Super Rocket V-8. In addition to increased displacement, the new engine also featured better cooling, a higher capacity fuel pump, redesigned combustion chambers, and enlarged intake and exhaust valves.

The Starfire version of the Super Rocket continued to be the most powerful Olds motor offered. Its output was boosted substantially over the 1964 level to 370 HP; it also maintained a 20-HP edge over its smaller displacement cousin, the 1965 4-4-2 engine.

Unfortunately, the hefty price tag continued as a Starfire sales barrier. The coupe listed for $4,148; the convertible bowed out as the most expensive Olds at $4,778. A total of 15,260 Starfires were built for 1965, including only 2,226 convertibles.

In 1961, the Starfire had debuted with a flourish complete with auto show centerstaging. Considerably less fanfare awaited the 1966 Starfire, however, which was destined to be the last in a half dozen year run at the personal-luxury market.

It was completely overshadowed by the revolutionary front-drive Toronado, which became Oldsmobile's first "true" personal-luxury car by virtue of its long hood/short deck proportions and its unique-to-Oldsmobile body shell. As might be expected, Starfire production skidded -- all the way to 13,019 -- while 40,963 units of the newcomer were built.

The Starfire also suffered a dramatic drop in status for its final year. The base price fell significantly as well, which was accomplished by stripping much of the previously standard equipment. For 1966, the sticker price started at $3,564. The rather sparse equipment list included console, dual exhausts, Strato bucket seats, and deluxe steering wheel.

Although the Starfire was in many ways diminished in its final year, the Super Rocket V-8 remained a powerful force by picking up five additional horses. Nonetheless, it fell 10 bhp short of the 385 listed for the front-wheel-drive Toronado.

Did the Starfire turn into a black hole for Olds? Seek out the answer in the next page.